The Finneco I, One Of The Most Efficient Ships In The World For Maritime Transport, Arrives At The Port Of Bilbao 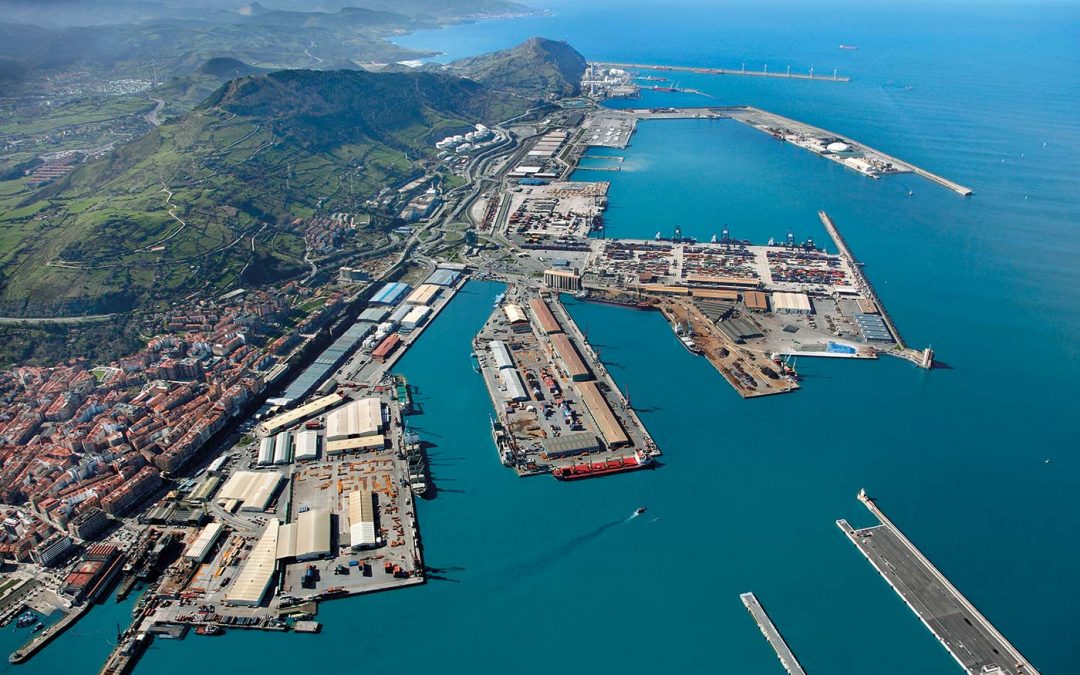 The port of Bilbao has welcomed the Finneco I, the first of the three vessels of the Finnlines company with which the Grimaldi Group will operate on the Baltic and North Sea lines and which are equipped with state-of-the-art technology, thereby making them amongst the most efficient vessels in the world. The commissioning of this ship brings the number of GG5G (Grimaldi Green 5th Generation) class vessels operating on Spanish lines for the short sea transport of goods to five. The shipping company is firmly committed to a young and highly efficient fleet.

On the occasion of the vessel’s first call at the port of Bilbao, Andima Ormaetxe, Director of Operations, Trade, Logistics and Strategy of the Port Authority of Bilbao, has presented the captain of the Finneco I with a commemorative metope.
This multi-purpose Ice Class ro-ro has a load capacity equivalent to 400 trucks, a 38% increase in terms of cargo with no increase in emissions. Improved efficiency comes hand-in-hand with state-of-the-art electronically controlled engine equipment and an exhaust gas cleaning system for reducing sulphur and particle emissions.

One of the most important new features of this model is the use of Zero Emission in Port, an innovative project which enables vessels to dock in port without running their auxiliary engines and, therefore, without generating any harmful emissions in the surrounding area. This is possible thanks to its system of shaft generators that recharge the lithium batteries whilst the vessel is at sea, and the presence on board of 350 m² of solar panels.
The Finneco I will make a weekly call in Bilbao, with a 24-hour stopover at the terminal operated by Toro y Betolaza, a partner of the shipping line in its services in the Basque Country. On its route, it will also call at the ports of Zeebrugge and Antwerp (Belgium), Travemünde (Germany), Helsinki and Kotka (Finland), and Paldiski (Estonia), as well as other ports in Great Britain, Sweden and Norway (with transhipment in Zeebrugge).

Multi-purpose vessels, versatility for freight transport
Finneco vessels can not only ship trucks and semi-trailers but also cars, containers, all types of static goods, steel products and project cargo (component parts for the railway and wind power industry), amongst others.

The efficiency and the sustainable and real alternative to road transport provided by this service has led many leading companies from various sectors to opt for Short Sea Shipping routes. Freight forwarders operating in Northern Europe and the Baltic, car manufacturers such as Volkswagen, Seat or Iveco and also direct producers such as Thyssen or steel companies in the Basque Country, such as Sidenor, are, amongst other organisations, some of the regular customers of the Group’s lines in Northern Europe. In addition, Grimaldi’s vessels are also outright leaders in the transport of rolling stock, with customers such as Talgo and CAF.

The Grimaldi Group further consolidates its presence in Bilbao
With this investment in new, more efficient vessels, the Grimaldi Group consolidates its strategic commitment to the port of Bilbao, reaffirming its interest in this line of service. In this sense, and after the closure of the routes with Saint Petersburg on account of the crisis between Russia and the Ukraine, the group is working on extending its services from the north of Spain.

Sebastiano Cirnigliaro, Head of Development and Logistics of the Grimaldi Group in Spain, has emphasised the strategic value of the port of Bilbao and the importance of Finnlines’ connections in the North of Spain. Furthermore, Cirnigliaro added that “the introduction on these routes of the most modern and technologically advanced generation of ships on the market, with three Eco units, is proof of the group’s firm commitment to the future of increasingly efficient and sustainable maritime transport on its routes with Spain. The capacity and versatility of these ships will enable us to continue to grow in all segments that make up the cargo mix of this line”.

For his part, the Port Authority’s Director of Operations, Andima Ormaetxe, emphasized that “Grimaldi’s commitment to Bilbao can once again clearly be seen with this new ship, which now forms part of a regular line as important and consolidated as that of Finnlines. In addition to having a greater load capacity, which will enable us to attract more traffic to Northern Europe and consolidate this port as a specialist in short sea shipping, this vessel combines technology, innovation and sustainability, all of which is in line with our commitment to becoming a greener port”.

The Grimaldi Group’s sustainable path, a strategic commitment
As part of the Grimaldi Group’s commitment to sustainability and emissions reduction, the shipping company has invested around EUR 1 billion in a new and highly efficient fleet of twelve ro-ro vessels and seven car carriers. In so doing, Finnlines aims to consolidate its position as the maritime logistics operator with the lowest environmental impact per transported unit operating in the market.
Furthermore, with the introduction of the Finneco class into service, Finnlines will deliver, ahead of schedule, the IMO targets in terms of CO₂ reduction values set for 2050, and to which the Group is fully committed.
With headquarters in Naples, the Grimaldi Group controls a fleet of more than 150 vessels and employs some 16,000 people. Owned by the Grimaldi family, the Group is a multinational company operating in logistics and specialising in the operations of roll-on/roll-off vessels, car carriers and ferries. The Group comprises seven shipping companies: Grimaldi Deep Sea, operating in the transport of rolling stock and containers on the Atlantic routes and between the Mediterranean and West Africa; Grimaldi Euromed, specialising in the transport of roll-on/roll-off goods in Europe, on the Motorways of the Sea and in the transport of passengers in the Mediterranean under the Grimaldi Lines brand; Trasmed GLE, active in the transport of goods and passengers between the Peninsula and the Balearic Islands; Atlantic Container Line, which operates container and ro-ro connections between North America and Northern Europe; Malta Motorways of the Sea, a shipping company; Minoan Lines, which operates Greek coastal services for freight and passengers; and Finnlines, which operates freight and passenger transport in the Baltic Sea and the North Sea.

Maritime connections are the backbone of a much more advanced logistics chain, which includes numerous port terminals and road transport companies. The more than 20 port terminals owned and/or managed by the Grimaldi Group can be found in 12 countries around the world: Italy, Spain, Germany, Sweden, Finland, Denmark, Ireland, Belgium, Egypt, Cameroon, Nigeria and Benin. Some of these terminals are equipped with warehouses and P.D.I. (Pre-Delivery Inspection Centre), as well as garages for handling new cars prior to their delivery to dealers.