Zelensky Calls For Lifting The Russian Blockade Of Odesa 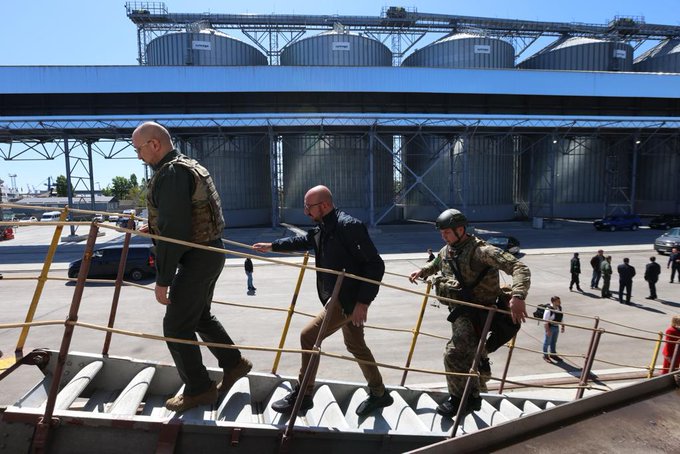 On Monday, Ukrainian President Volodymyr Zelensky called for assistance in lifting the Russian blockade of Odesa, which has prevented billions of dollars’ worth of wheat from reaching global markets.

“For the first time in decades, there is no usual movement of the merchant fleet, no usual port functioning in Odesa,” Zelensky said. “Without our agricultural exports, dozens of countries in different parts of the world are already on the brink of food shortages. And over time, the situation can become downright terrible.”

An estimated 25 million tonnes of grain are stuck in storage in Ukraine, according to the UN Food and Agriculture Organization (FAO) – and the country’s farmers are currently sowing crops for the next season. Production will likely be reduced because of the war, but by the end of the summer, FAO expects that the next harvest will overwhelm the nation’s remaining storage capacity. Ukraine is still able to export a small amount of grain by rail and by riverine ports on the Danube, but these volumes are nowhere near the quantity that is normally loaded onto bulkers at its coastal ports.

“This is a direct consequence of Russian aggression, which can be overcome only together – by all Europeans, by the whole free world. It can be overcome by putting pressure on Russia, by effectively forcing Russia to stop this disgraceful war,” Zelensky said.

The city of Odesa has been repeatedly hit by Russian sea-launched cruise missiles, but Russian forces have so far been unable to approach by land. Defenders at Mykolaiv have repulsed repeated attacks from the Kherson direction (below), preventing a Russian advance on Ukraine’s main seaport.

Western analysts view an amphibious assault on the port city as an unlikely event, especially after Ukraine demonstrated its anti-ship missile capability with the sinking of the Russian cruiser Moskva – a much better-defended platform than a Russian tank landing ship.

Though Odesa remains outside of the main fight, cruise missile strikes are still a security concern in the city. European Council President Charles Michel visited Odesa on Monday to meet with Ukrainian Prime Minister Denis Shmyhal, and his spokesperson told press that he was forced to seek shelter due to a Russian missile attack.

Though previous attempts have been stopped, Russian President Vladimir Putin may yet have designs on seizing the port city, according to the United States’ top intelligence official. Avril Haines, the U.S. Director of National Intelligence, said Monday that she sees “indications that the Russian military wants to extend the ‘land bridge’ to Transnistria,” which would require seizing Ukraine’s coast between Crimea and the Moldovan border. If Russian forces could assemble the capacity to execute this mission – an uncertain prospect, given their ongoing challenges in the Donbas region – a Russian “land bridge” to Transnistria would separate Ukraine from the sea.