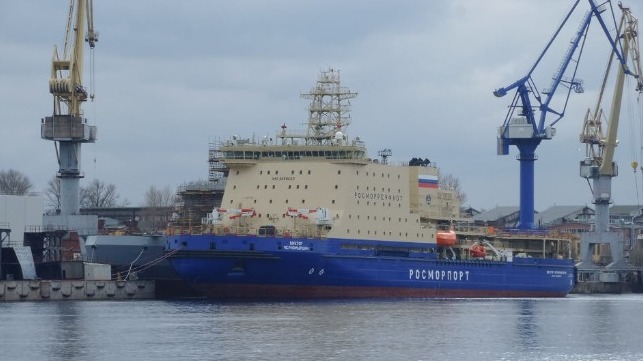 Russia’s new diesel-electric icebreaker Viktor Chernomyrdin has finally made its maiden voyage to the Arctic to undergo ice trials, 18 months after it was commissioned.

The vessel is the world’s longest non-nuclear icebreaker, but its construction was marred by delays, cost overruns and damage caused by fire. The ice trials were originally expected to take place in 2020.

The vessel departed Murmansk for the ice testing program, which is designed to take 10 to 15 days, depending on the actual state of the ice fields and the remoteness of the testing areas.

“In accordance with the navigation schedule, the Viktor Chernomyrdin icebreaker completed escorts in the Gulf of Finland and arrived in Murmansk, from where it is heading to the Arctic for planned ice trials,” said Rosmorport, the enterprise responsible for Russian seaport and maritime infrastructure development.

Despite being Russia’s most powerful conventional ice-breaking vessel, the ship had never been to the Arctic, with its mission limited to breaking ice in the Gulf of Finland.

The icebreaker is designed for escort and towing, and it is also capable of transporting and supplying scientific expeditions in the Arctic and the Antarctic, carrying up to 90 special personnel in addition to its 38 crewmembers. The Chernomyrdin can also serve as a fire-fighting vessel.

The vessel boasts an ice class of Russian Maritime Register Icebreaker8, and is capable of speeds up to 18 knots in clear waters. It is capable of breaking through two meters of ice at a continuous speed of two knots. It can perform operations in ice of up to three meters.

Chernomyrdin’s construction started in 2012, but it encountered numerous obstacles and challenges, including Western sanctions, currency devaluation and design errors that resulted in significant cost overruns. In November 2018, a fire broke out on board at St. Petersburg’s Admiralty Shipyard. While construction of the icebreaker was originally slated to be finished in 2015, it was not delivered until 2020.