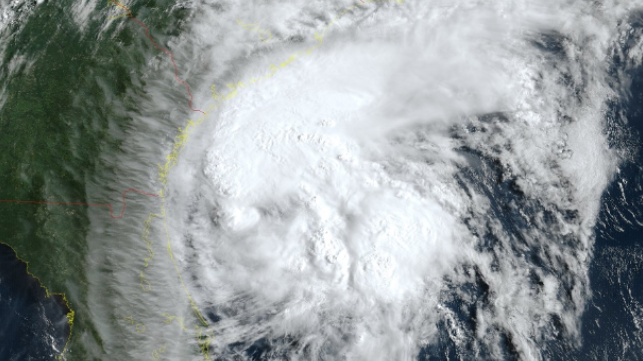 Chinese officials issued warnings and ordered ports in the Shenzhen region to suspend operations as a strong tropical storm approached the region after bringing heavy rain to the Philippines. The storm named Kompasu is expected to pass south of Hong Kong overnight before moving west and coming ashore over northern Vietnam and moving into Cambodia by the end of the week.

The storm, which is expected to bring winds between 50 and 70 mph to Hong Kong overnight, prompted Hong Kong’s weather department to issue a No 8 warning signal, the second typhoon warning for the city in days. Over the weekend Hong Kong experienced a previous, weaker storm that also caused heavy rains. Saturday’s storm warning lasted nearly 24-hours making it one of the longest in recent years. In southern China, local officially issues the equivalent warning which is known as a yellow signal going into effect as of mid-day on October 12.

“YICT gatehouse services have been suspended at 00:01 hrs on 12 Oct 2021,” the Yantian International Container Terminal advised customers. Similar suspensions were placed on the other container ports in Shenzhen and the Pearl River Delta as well as in Hong Kong.

The closure comes as ports in the region are already reporting strong backlogs and heavy levels of congestion. Yantian alone handles more than 100 containerships a week with annual volumes of over 13 million TEU. A COVID-19 outbreak that impacted port operations at YICT in June caused the backlog to spike over 60 containerships and today Bloomberg is reporting that it estimates 67 ships are waiting for terminal space at Yantian, the highest since late August.

Officials were warning residents of Hong Kong to head home early and stay indoors until the storm subsides on Wednesday. Hong Kong’s harbor ferries and others operating to the outlying regions have also suspended service beginning on Tuesday.

Tropical Storm Kompasu intensified east of the Philippines. The storm brought heavy rains to the northern and western Philippines causing widespread damages and mudslides. Officials are reporting that at least nine people were killed with as many as 16 people reported missing.

As the storm continues its path westward it is expected to come within 300 miles of Hong Kong. Officials are hopeful that the warnings will be lifted by Wednesday morning.

This is the second major storm to interrupt port operations in southern China in the last month. In mid-September, Typhoon Chanthu impacted the world’s busiest container port, Shanghai, as well as the Ningbo port complex. Although the storm did not make a direct impact on Shanghai, the port along with others in the region and the airport were all closed.