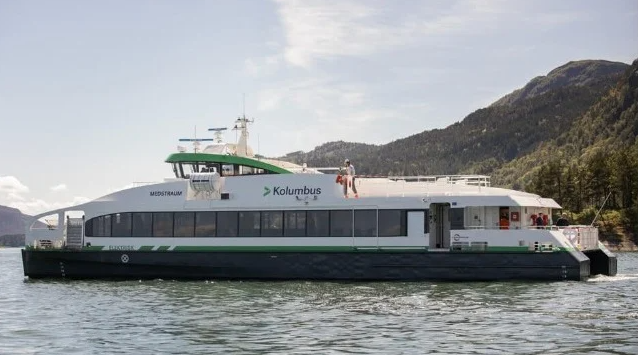 The world’s first fully electric and zero-emission fast ferry, classed as a high-speed craft, recently completed construction and is being delivered to its new homeport in Stavanger, Norway. After final trials, the vessel, MS Medstraum, is scheduled to begin regular commuter service in Norway as a further demonstration of the future electric ferries.

The vessel was built using a unique modular manufacturing method at the Norwegian shipyard, Fjellstrand. According to the shipyard, modularisation helped to cut both production costs and engineering costs and will contribute to making electric-powered high-speed vessels competitive in terms of both cost and the environment.

“It’s been challenging building this ship, as it’s never been done before, but we’ve learned a lot. Fast ferries require a lot of energy so we needed to make Medstraum lighter and a lot more efficient than traditional fast ferries,” said Edmund Tolo, head of research and development at Fjellstrand AS.

The Medstraum is approximately 260 gross tons. The vessel is approximately 98 feet long with a capacity up to 147 passengers and operated by a crew of three. It will sail a regular service between Stavanger, Byøyene, and Hommersåk in Norway for Kolumbus. The typical schedule is for sailings lasting between 35 and 40 minutes.

“It is revolutionary that a vessel of this size can operate at 23 knots for an entire hour by electricity alone,” said Tolo. The shipyard reports that the vessel achieved a maximum speed of 27 knots. The catamaran has two electric 550 kW motors and a 1524 kWh battery capacity with charging power of 2.3 MW.

Fjellstrand shipyard in Hardanger, Norway notes that the world’s first fully-electric ferry, Ampere, was built just seven years ago in 2015. They estimate that there are now approximately 70 emission-free ferries operating in Norway, but this is the first to be classed as a high-speed craft.

“Not only have the project partners developed and demonstrated a new and emission-free propulsion system that can maintain higher speeds than before, but we have also adopted a completely new modular design and construction methods that will revolutionize the way we build boats in the future,” said Hege Økland, CEO of Maritime CleanTech, the cluster organization that initiated and established the EU-funded TrAM-project, which resulted in Medstraum.

“We are very happy to finally get this flagship delivered,” said Mikal Dahle Project Manager at Kolumbus. The company which currently has ten conventional fast ferries, estimates the Medstraum will cut its emissions by 1,500 tons a year, despite operating on its least energy-demanding route.

The project to develop the fast ferry involved a broad coalition of companies located in Norway, Germany, and the Netherlands and also involved both the University at Strathclyde in Great Britain as well as the National Technical University in Athens. The Medstraum was classed by DNV.

The vessel cost approximately $11 million to build with 50 percent of the cost underwritten by the European Union as a demonstration project.