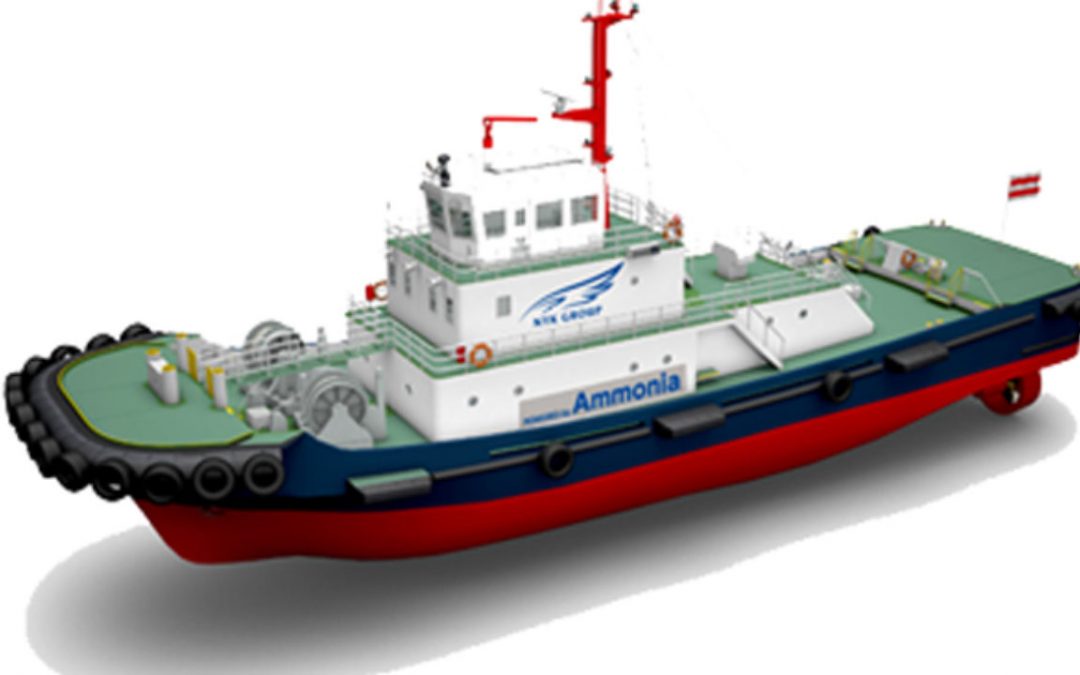 With the entry into force of the Paris Agreement in 2016, global momentum for decarbonization has increased, and reducing GHG emissions has become an issue in the shipping sector. In 2018, the International Maritime Organization (IMO) set a goal of halving GHG emissions from the international shipping sector by 2050 and reaching a target of zero as early as the end of this century.

Since carbon dioxide (CO2) is not emitted when ammonia is burned, it is viewed to have promise as a next-generation fuel that could mitigate shipping’s impact on global warming. In addition, it is said that zero emissions can be realized by utilizing CO2-free hydrogen* as a raw material for ammonia.

Thus, the companies have decided to start this joint R&D for an ammonia-fueled tugboat. In fact, the companies worked together to jointly develop the LNG-fueled tugboat Sakigake**, which was built in 2015 as Japan’s first ship fueled by liquefied natural gas (LNG). In this new joint R&D project, we will utilize the knowledge cultivated in the development, construction, and operation of Sakigake.

The companies will proceed with R&D from both technical and operational aspects for the introduction of ammonia as a marine fuel for tugboats.

Specifically, in fiscal 2020 we will tackle themes such as technological development of the hull, engine, and fuel supply system, and development of safety navigation methods. After evaluating the practicality of the R&D results, we will begin study of the construction of the ammonia-fueled tugboat and the plan for construction.

The initiatives of each company regarding this joint R&D are as follows.

The introduction of ammonia as a marine fuel is highly expected to be a practical solution for decarbonization in the shipping sector. This joint R&D envisions the implementation of ammonia marine fuel in tugboats that require high output, and we will firmly establish the technical and operational requirements for that purpose. If it is possible to commercialize marine equipment that uses ammonia, which is one of the candidates for a next-generation fuel, and establish a method for operating the vessel, it is expected that the Japanese maritime industry will make a significant contribution to decarbonization of the international shipping sector.

One way of producing hydrogen without generating CO2 is through the use of renewable energy. A second way is by using natural gas or coal together with carbon capture and storage. CO2-free ammonia synthesis is technology for synthesizing ammonia using such CO2-free hydrogen.

Sakigake is owned by NYK Line and operated in Yokohama port and Kawasaki port under the navigation of Shin-Nippon Kaiyosha. Japan’s first LNG-fueled tugboat, Sakigake was built at Keihin Dock Co. Ltd. and is equipped with a dual-fuel engine that can use either LNG or diesel oil, depending on conditions. The tugboat’s engine was constructed by IHI Power Systems Co., Ltd. (Niigata Power Systems Co., Ltd. at the time of construction). When using LNG fuel, Sakigake becomes an eco-friendly tugboat compared to when using heavy oil because sulfur oxide (SOx) emissions are reduced by approximately 100%, nitrogen oxide (NOx) emissions by approximately 80%, and carbon dioxide (CO2) emissions by approximately 30%.