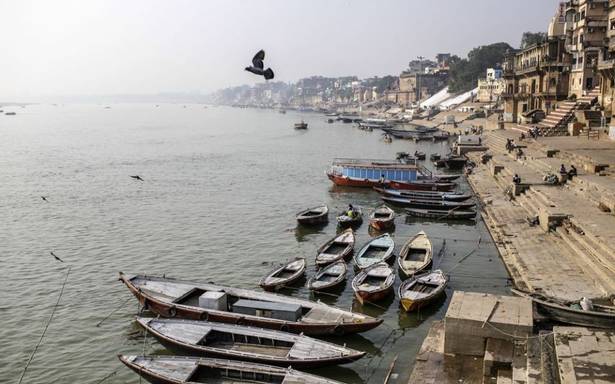 Cost and time overruns on publicly-funded projects have become an intrinsic part of the governance system. So, it comes as a huge surprise that the Jal Marg Vikas Project (JVMP), partly funded by a $375 million World Bank loan, has managed to save some ₹1,600 crore of which as much as ₹800 crore will be used to develop facilities for people living along the banks of the Ganga stretching from Uttar Pradesh to Bihar.

As a result, the government has requested the World Bank to cancel $57.78 million from the overall loan of $375 million for the JMVP that seeks to augment the navigation capacity of the 1,400 km long Varanasi to Haldia stretch on National Waterway 1.

How did this come about?

Almost 45 per cent of the total project cost was initially estimated to be spent on dredging the Ganga river.

The IWAI then secured permission from the World Bank to utilise about half of the overall savings to bring new components into the project and named it ‘Arth Ganga’.

What was the logic behind this?

As much as 30 per cent of the country’s population lives on the banks of the river Ganga from Uttar Pradesh, Bihar and Jharkhand – generally the economically disadvantaged regions of the country- but who have never been a part of the narrative on economic development.

How do the people benefit from this project was the question that was posed to the government.

With the help of experts from the Massachusetts Institute of Technology (MIT) and the World Bank, the IWAI will be putting new components such as community jetties, small village jetties, small 10/20 ton mechanised boats for farmers, vegetable and fruit growers living on the banks of the river to help them cross the river which otherwise was impossible due to lack of bridges and roll-on-roll-off services.

“Out of the savings of ₹ 1,600 crore, we will be investing about ₹800 crore for enabling the people to use the waterway as a very cheap mode of transport to access markets and thereby remove middlemen and dependence on trucks,” the Ministry official said.

The expected expenditure on the various components/ sub-projects under JMVP has been reviewed by the Ministry, and their cost has now been revised to ₹4,633.81 crore. The resultant savings of ₹735.37 crore ($109.78 million) comprise ₹387.10 crore ($ 57.78 million) from the World Bank loan component and ₹348.41 crore from the counterpart fund component from the government of India.

“The Department of Economic Affairs has requested the Word Bank for cancellation of $57.78 million from the overall loan for the JMVP,” the official added.