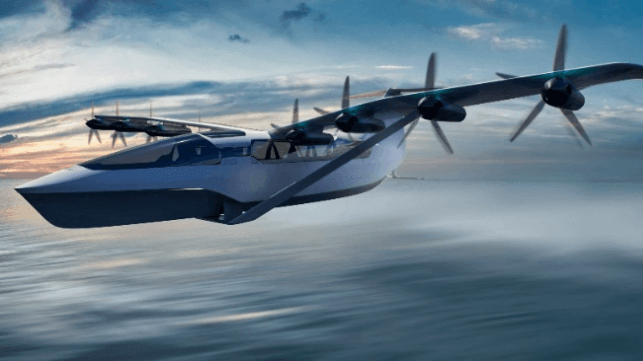 A team of Boeing alumni has launched a startup company focused on developing an all-electric wing-in-ground effect (WIG) craft for short-haul coastal flights – and they are winning investment support from some big names.

Regent (Regional Electric Ground Effect Naval Transport) is a Boston-based startup founded by former employees of Boeing’s rapid-prototyping division, and it is designing and building a WIG craft branded as the “Seaglider.” It is a high-wing, hydrofoiling, all-electric plane with eight motors and room for 12 passengers (up to 50 with a follow-on design).

According to Regent, the concept works well from a business perspective because of the low-maintenance, low-opex nature of electric propulsion. The design range is 180 miles at a speed of 180 mph – enough speed and distance to compete with regional rail, fast-ferries and commuter airlines. No airport would be required, meaning no TSA security, no flight plan, no air traffic control, no multi-acre runway and no airspace congestion. As a WIG craft, maritime passenger-vessel regulations would apply.

For a practical example, Regent suggests a typical itinerary from Newark Airport to the Hamptons, a common regional route for out-of-town vacationers. With eVTOL transport from Newark to a Brooklyn terminal, followed by a 50-minute WIG voyage to the Hamptons, the total transit would take less than two hours at a total fare of about $120, according to Regent’s prospectus.

The design is intended to maximize safety and reduce complexity. The aircraft would have more or less constant altitude, and the pilot’s role would be limited to selecting speed and heading – much like a vessel. It would be fitted with automated collision-avoidance systems.

The company has attracted investment backing from JAM Fund, Thiel Capital and Mesa Air Group, a large regional airline. Mesa CEO Jonathan Ornstein has suggested that he would like to purchase 200 of the new WIG craft to build out a city-to-city network.

“There is a very significant pilot shortage today after government regulations put in place a few years back are coming home to roost. The 1,500-hour requirement has crippled the industry,” Ornstein told CNBC, referring to a regulatory requirement for minimum flight hours for commercial pilots. As a WIG craft, Seaglider would fall under a different regulatory regime and would not have the same crew licensing requirements as a commercial airliner.