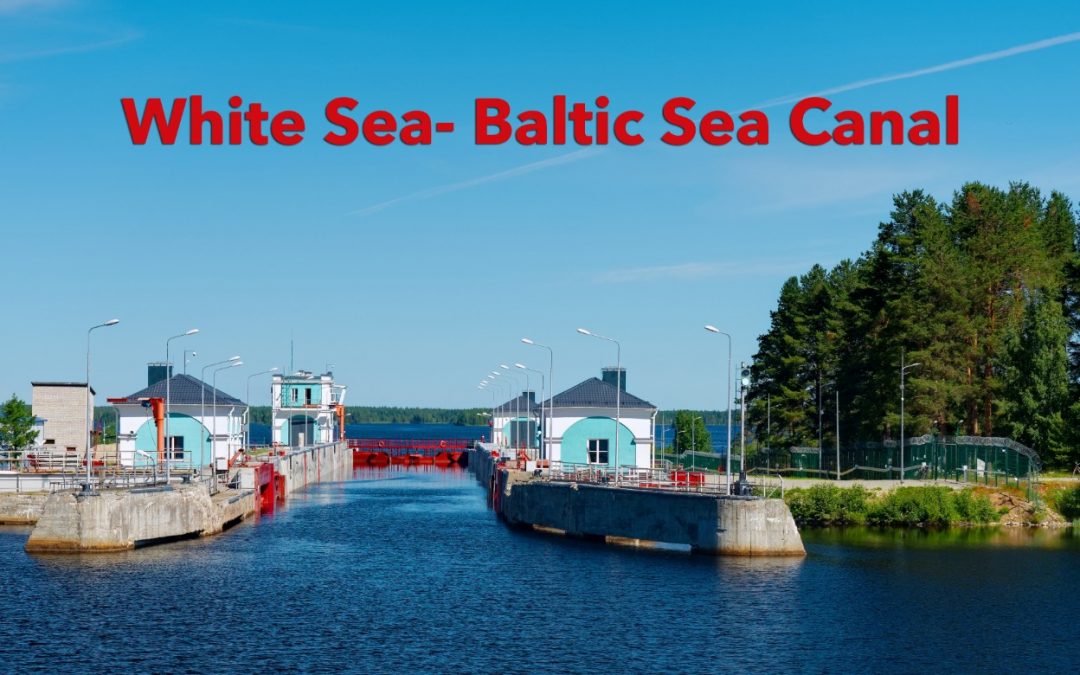 The Russian Belomorsko-baltiysky Kanal or the White Sea Canal, an important waterway, was constructed between 1930 and 1933 largely by penal labour. The canal starts in the north from the White Sea, passes through various smaller water bodies like rivers and lakes, finally reaching to the Baltic Sea down south through a system of locks. Simply put, the 227 km-long canal acts as a connection between the White Sea in the Arctic Ocean with Lake Onega, which is further connected to the Baltic Sea.

The canal begins in Povenets bay of Lake Onega, from there the current flows north towards the White Sea, so all the navigation marks are set accordingly. There are seven locks on the southern slope of the canal which form the “Stairs of Povenets”. The canal’s summit pond at 103 m elevation is 22 km long. The northern slope consists of a total of 12 locks which pass through five large lakes and empties out into the Soroka Bay of Baltic Sea.

The geographic location of Russia showcases a lack of direct contact with the sea and the other civilized parts of the world. Further, the unfavourable climatic conditions affect the nation. During winter from October to June, the nearby sea freezes and during summer, from May to September it warms up and that is the ideal time for passing through the canal. Such variations depend upon the distribution of salinity across the sea. Every year, the freezing period differs thereby affecting the navigation periods.

For the navigation seasons of 2008 to 2010, the canal locks were scheduled to operate from 20 May to 15–30 October, giving 148–163 navigation days per year. This year, voyages started a month early and will continue until at least the end of December. Record warmth meant slower freezing during the autumn. The longer the Northern Sea Route stays open, the more LNG cargoes can head directly to Asia, where it is consumed by industry. Russia and the LNG industry are working to extend that shipping season, deploying the world’s biggest icebreaker starting in October to escort tankers for more months of the year.

For a long time since the 19th century, people dreamed of having such a canal, to avoid exhausting travel. However, they couldn’t fulfil it either due to economic or technological constraints.

The semi-enclosed shelf sea, White Sea, has lower than average salinity because of mixture of waters from various rivers and inland water-bodies. The climate in the surrounding area remains very changeable and unpredictable. Tides are usually regular and semi-diurnal.

Further, the Baltic Sea’s entrance is dominated by foreign countries, making it of a limited importance for Russia. Due to its shallowness, its large drainage basin, its limited intake of salt water, its abundance of rainfall and its low rate of evaporation at its latitude it has a low salinity which in turn favours freezing for almost four months of the year.

Therefore, they built a rail to facilitate cargo traffic and for developing the regions nearby. This was only possible as the area was, and still continues to be sparsely populated.

Later in 1931, the Council of Labor and Defense of the USSR and Joseph Stalin, Former Premier of the Soviet Union made a decision to begin constructing the White Sea-Baltic Canal. They were of the opinion that this connection would allow the Russia’s naval and commercial fleets to access the country’s northern coast without having to sail through the Baltic and around Scandinavia. Further, they contemplated that it would also facilitate connections between Russia’s industrial centers in the southwest to towns and settlements in the Russian Arctic and northern Siberia.

Interestingly, the complex hydraulic structure of the canal including 19 locks, was built merely in one year and nine months in spite of the absence of any significant mechanization of labour. The Canal was opened on August 2, 1933 and until 1961, its original name was the Stalin White Sea Canal. As a result two major seas off the coast of Russia were connected and it cut the journey from twenty days to eight.

Although, the entire construction was completed before time, the canal had its own drawbacks. Originally proposed to be 5.4 m (17.7 ft) deep, the cost and time constraints of Stalin’s plan forced a much shallower draught. Therefore it wasn’t beneficial economically and most sea-going vessels could not use it. However, it was quite useful during the World War II for transferring of ships. It did lead to the creation of the Soviet Union’s northern naval force: in 1933, two destroyers, two frigates, and two submarines from the Baltic Fleet sailed via the canal.

Today, it witnesses only light traffic consisting mainly of barges and small passenger or cargo vessels since it isn’t suitable for merchant ship vessels with larger dimensions and specifications. In conditions of low visibility (less than one km) navigation is halted. The depth of sheer 3.5 m typically corresponds to river craft with deadweight cargo up to 600 tonnes. The Republic of Karelia is considering revamping the canal in order to attract more tourism.

During 1946, the canal was repaired for damages, and in around 1950, electrification of the canal’s structures and machinery began. In 1953, the locks’ staff hired electricians; by 1957, the electrification of the locks of the northern slope was completed; and by 1959 all coastal and floating navigation lights were switched to electric power. Another upgrade took place wherein the guaranteed depth of the fairway was increased to 4 meters, and the channel became part of the Unified Deep Water System of European Russia.

It is estimated that a total of 193 million tonnes of cargo had been transited through the canal over the first 75 years of its operation since 1933. Cargo traffic peaked in 1985, with 7.3 million tons transported. In 2002 in contrast, the canal transported a mere 314,600 tons. The principal cargo on the system is timber, much of it for paper mills and timber-working enterprises along the route. The canal still serves some economic purpose: it continue to provide transportation corridors, potable water, recreational areas, and electric power for millions of Russian citizens. But expanding Stalin’s pet project to allow high levels of commercial shipping is probably out of the question due to the enormous expenses that would be required.

On the other hand, the canal is known for its dark history. The entire construction of the canal (except engineers) was completed by forced prison labour, which lacked skilled technical experience. The poor working condition, shortage of food, extreme weather, manual work and competition to work for being freed from the prison in exchange of the work, lead to many deaths. According to the official records, at least 12,000 workers died during the building process.

Unfortunately, the Russian government is doing little to raise awareness of the history. Only two small memorials to the Gulag victims can be found along the canal route. Even today, sailors sailing through this canal, often denote it as a high security canal, where you are not allowed to click pictures and follow strict rules.  Historians undertook extensive research to find out more about this dark history. Tourists popularly take a ride in the canal and walk along the edges in search of the unmarked grave areas.

Currently with the tourism development in Karelia most of these boats belong to tour companies. These boats pass through the area’s top natural attractions, including several canalized rivers and Lakes. Old lighthouses and preserved buildings from Tsarist rule are of particular interest along the route. So even though not very popular for huge vessels, it is easy to see why the canal has become popular for recreational users.