What Will The African Continental Free Trade Area Mean For Shipping? 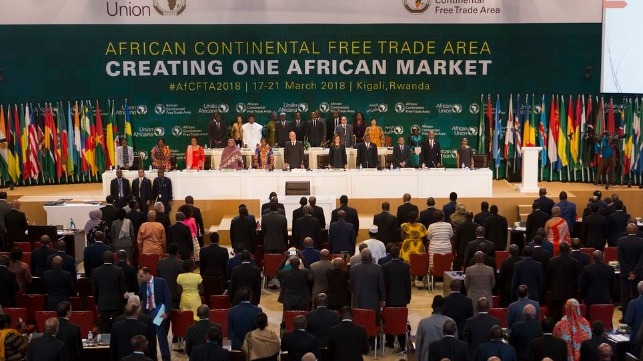 The start of this year heralded the implementation of the AfCFTA (African Continental Free Trade Area), a flagship project of the African Union’s Agenda 2063 to stimulate intra-African trade. The project aims to create a single continental market for goods and services through a comprehensive agreement by member countries that will see more African resources traded within the continent. The agreement will cover 1.2 billion people with an estimated combined consumer and business spending amounting to $6.7 trillion in 2030.

In 2019, intra-African exports were valued at $69 billion, which represented 15 percent of the Africa’s world exports. Both intra-African exports and Africa’s world exports have been on decline since 2018 at an estimated rate of 5 percent and 8 percent, respectively. This is to show the dismal rate of intra-African trade, which continues to depend on trade patterns established in colonial times – value chains that support the flow of primary goods to the developed world and the return of finished goods. Comparatively, intra-regional trade within other trade blocs is in the order of 59 percent for the Association of Southeast Asian Nations (ASEAN) and 69 percent in the European Union.

With Africa relying heavily on the maritime industry for intercontinental trade, how will AfCTA benefit the development of the industry at the intra-African trade level?

First, one of the guiding objectives of AfCFTA is to lay the foundation for establishment of a Continental Customs Union, which will seek to harmonize customs matters by member countries and implement trade facilitation measures. Customs delays in most African countries have been singled-out as one of the major reason that contributes to high cost of shipping commodities to Africa, as goods in some countries can take close to 10 days to complete customs clearance. The borderless African Continental market envisaged in AfCFTA will definitely be a step forward in reducing the cost of shipping in Africa and improving efficiency in the industry. For example, the East African Community has so far installed 25 one-stop border posts that have significantly reduced the amount of time goods have to spend going through customs.

Secondly, AfCFTA promises to expand the intra-African trade from the traditional regional economic communities – where trade between African countries is currently domiciled – to the continental level. This will help diversify African economies and promote continental trade integration that could see an increase in containerized trade and port traffic volumes. It is important to note that most African countries trade finished goods amongst each other, but due to the low industrialization levels in Africa, they still have to depend on developed markets for supply of these goods. Thus, investment in industrialization will be key to ensure that “Made in Africa” brands that AfCFTA hopes to market within Africa will be successful.

The maritime trade aspect of AfCFTA will still be dependent on foreign-owned vessels, as no African country features among the top 30 shipowning countries in the world as of 2019.Another point to note is some countries will benefit more from AfCFTA, especially large economies with well-developed transport infrastructure and hub ports, like South Africa, Egypt and Morocco.