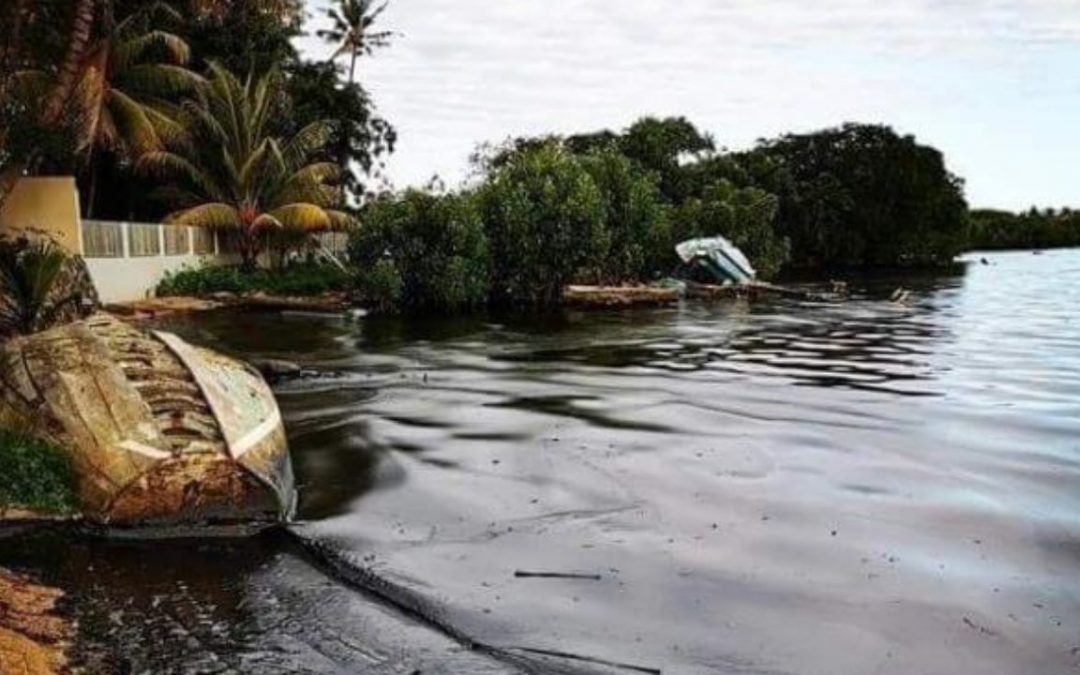 Mitsui O.S.K. Lines, Ltd. (MOL) received the following information from Nagashiki Shipping Co. Ltd.(Nagashiki) who is the owners and managers of bulk carrier Wakashio and Time Chartered to MOL.

As of July 25 Local Time when the vessel ran aground, it had approximately 3,800 MT of Very Low Sulphur Fuel Oil(VLSFO) and 200 MT of Diesel Oil(DO) onboard.

By August 11, Local time, approximately 1,020 MT of VLSFO onboard had been pumped out and transferred onto small tankers.

Approximately 1,180 MT had leaked out from the vessel fuel tank, which an estimated 1,000MT has leaked outside of the vessel, and 460 MT is estimated to been manually recovered from sea and coast.

About 1,600 MT of VLSFO and about 200 MT of DO remain on the ship, and transfer work will continue.

Situation of the Ship

We confirmed that the crack inside the hull of the ship had expanded. Since this ship is unable to navigate by itself, it is moored to a tugboat so that it will not drift even if it is broken.

There is no cargo on board.

MOL, has dispatched 6 members from our company, who have tested negative for PCR, to the site today (11thAug) for the purpose of cooperating with the authorities, collecting information, preventing the spread of oil pollution, and supporting oil spill recovery. We will continue to consider additional dispatch of personnel and transportation of supplies.

As Charterer, MOL has been in constant touch with the owner since first informed of the incident on the island of Mauritius.

MOL have offered all support and assistance and are aware that a large team of professional oil responders and salvors, led by Smit International of the Netherlands, which has been contracted by owners and has been on site for some days.

MOL is doing everything possible to support the efforts of owner and manager, Nagashiki Shipping and their appointed teams in mitigating the effects of the spill. MOL deplores any incident of oil pollution and continues to offer support to all involved in the response.

The following is an excerpt from the press conference to explain the meaning of “shipowner”, “Technical Manager” and “operater/Charterer” which we have received many inquiries.

“Shipowner” is the Owner of the ship, “Technical Manager” will provide the ship with crew, and make it ready to carry cargo. The ship is then provided to the “Operator/Charterer” (MOL). The charterer will rent the ship for a certain period of time, find the cargo to load onboard, and give orders to the ship to transport the cargo from one location to another.