Waveswing Reaches Orkney Ahead Of Wave Energy Trials At EMEC 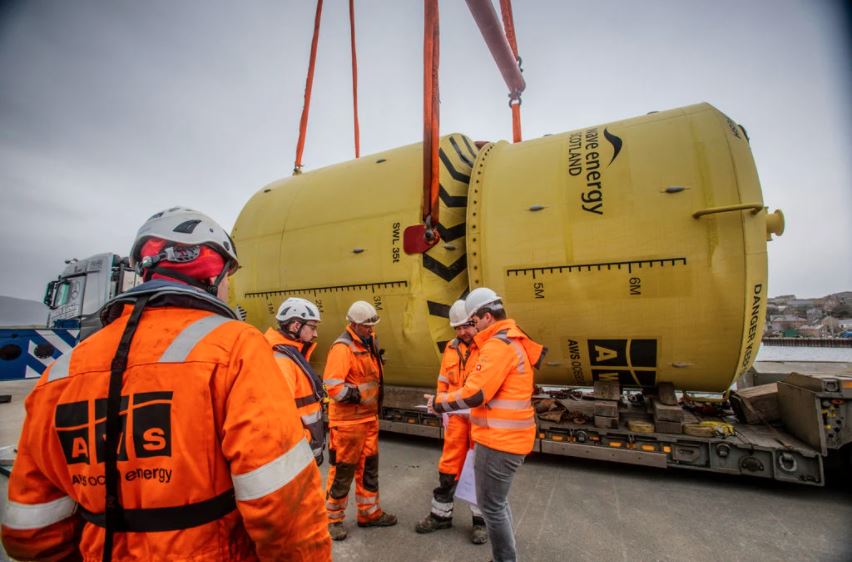 The 16kW Archimedes Waveswing arrived at Hatston Pier in Kirkwall on January 25, 2022, before being transported to Copland’s Dock in Stromness where it will be readied for deployment at EMEC’s Scapa Flow test site in February.

Weighing in at 50 tons, the seven-meter high and four-meter diameter device travelled to Orkney by ferry following a period of dry testing undertaken by the AWS Ocean Energy’s engineering team at Muir of Ord.

When deployed, the Archimedes Waveswing is moored to the seabed and sits below the surface of the sea, reacting to changes in pressure caused by passing waves. It will be moored on a single tension tether, according to EMEC.

The subsea location and ability to winch low in the water column enables extreme storm loadings to be avoided so that the device can continue to operate in rough sea conditions.

The Waveswing is designed to react to long ocean swell waves as well as short, wind-driven seas, for high energy capture.

The design of the current generation of Waveswing has focused on remote power applications such as powering subsea oilfield assets and oceanographic monitoring.

The £3.4 million prototype project has been funded by Wave Energy Scotland (WES) as part of the Novel Wave Energy Converter development programme, while the demonstration at EMEC is also supported by the Interreg North-West Europe’s Ocean DEMO project.

Simon Grey, CEO of AWS Ocean Energy, said: “Our current Waveswing design focusses on remote power applications such as powering subsea oilfield assets and oceanographic monitoring, however the device is suitable for integration into submerged platforms and can be scaled to over 500kW per unit. AWS expects to develop platforms hosting up to 20 units with a potential capacity of 10MW per platform.”

Neil Kermode, managing director at EMEC, added: “Real sea deployment is a vital step in proving performance, reliability and survivability of these devices. We know that prototype testing at sea is really valuable to technology developers to check how a technology and its components work and react in the environment prior to scaling up.

“We are looking forward to helping the team as they prove how to install, operate and maintain their exciting machine in Orkney’s harsh conditions.”

The Waveswing development programme has been supported by a strong, predominantly Scottish team of subcontractors including 4c Engineering and Quoceant on design, Sequentec on supply of the control system, Malin Marine for the main build and assembly work, and JGC Engineering for fabrication of the anchor frame.

Marine operations for deployment of the device will be carried out by Stromness-based Green Marine, EMEC informed.