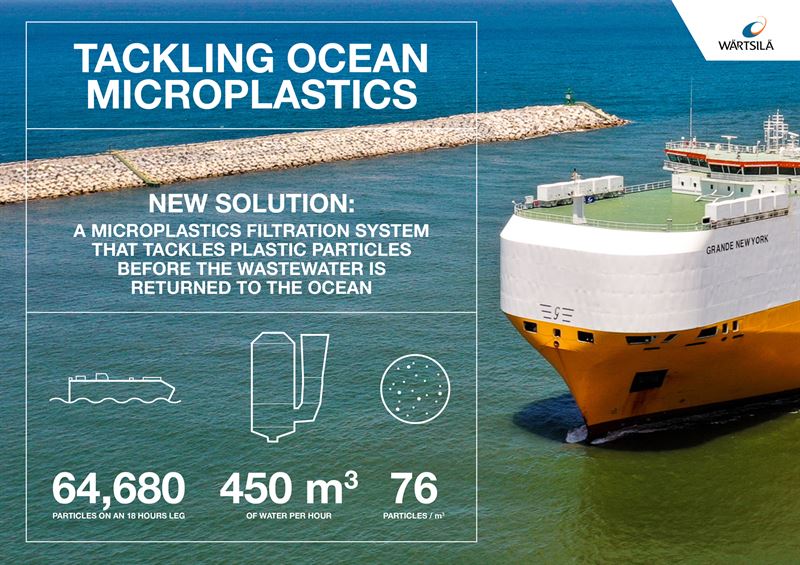 The technology group Wärtsilä, together with the shipping company Grimaldi Group, have unveiled a new system that uses exhaust gas scrubber washwater to tackle the amount of microplastics in the world’s oceans; a critical and growing global environmental challenge.

According to the association Plastic Europe, 368 million tonnes of plastic were produced in 2019 worldwide, and around 3%, or 11.4 million tonnes, of this plastic ultimately ends up in the ocean. To tackle the growing amount of microplastics in the world’s seas, Grimaldi has developed and patented a system that filters out microplastics from open loop scrubber washwater.

Wärtsilä, in partnership with the Neapolitan group, will take the microplastics filtration system – which traps plastic particles before the washwater is returned to the ocean – to market. The capability to filter microplastics will be an integrated feature of Wärtsilä’s future wash-water treatment system.

The new system requires very little changes to onboard procedure and uses the natural capabilities of an open loop scrubber to contribute to cleaning the oceans during each voyage. Currently, a 10-megawatt engine will require scrubbers to process approximately 450 m3 of water per hour, potentially resulting in a large amount of microplastics being captured from seawater. According to early test results, the microplastics filtration system is efficient in capturing particles smaller than 10µm and the captured concentration by volume equals around 76 particles/m3.

Adding an abatement solution for microplastics to Wärtsilä’s portfolio further strengthens its commitment to use exhaust gas cleaning systems as a part of a modular platform that can enable further environmental technology innovations.

“Reducing microplastics pollution in our world’s oceans is an important challenge, and we are pleased to provide a solution for the shipping industry. The idea for this innovative technology originated from recognising that open loop exhaust gas cleaning systems can draw seawater for exhaust scrubbing and simultaneously collect microplastic present in the oceans as part of their normal operation”, commented Emanuele Grimaldi, managing director of the Grimaldi Group. “We have already completed pilot testing of this system onboard one of our vessels deployed between Civitavecchia and Barcelona. The results are promising, with 64,680 microplastic particles collected on a single voyage between these two ports. We are glad that Wärtsilä also recognises the potential of this system, and we look forward to further collaboration to tackle microplastics in our oceans”, Emanuele Grimaldi added.

Tamara de Gruyter, President Marine Systems at Wärtsilä, said: “It is a pleasure to continue our long relationship with Grimaldi and announce this innovation. Microplastics are a pressing environmental challenge and we’re proud to work together with Grimaldi to tackle cleaning up the oceans. Even more importantly, the ability to capture microplastics shows how scrubbers are a platform for solving a wide range of sustainability challenges – and now even ones that are beyond the stack.”

Wärtsilä Exhaust Treatment is the market-leading exhaust gas abatement treatment manufacturer in the shipping industry, with an array of sustainable lifecycle systems. It offers integrated compliant solutions for all types of ships, with open loop, closed loop or hybrid configurations. In adopting a modular approach to all technology developments, Wärtsilä scrubbers act as a springboard to integrate new exhaust abatement technology beyond only sulphur.