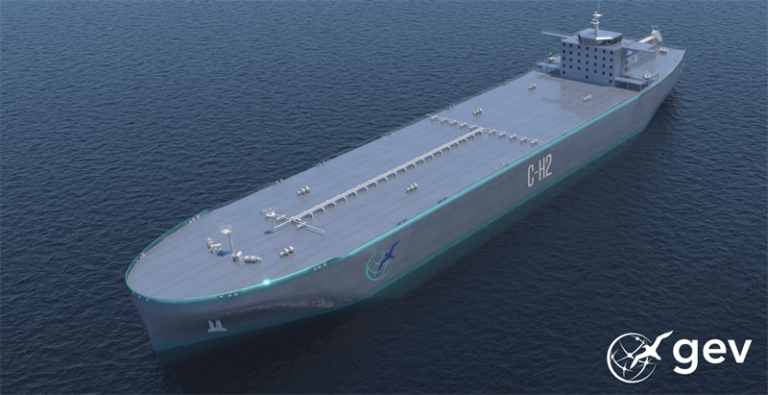 The technology group Wärtsilä has signed a Memorandum of Understanding (MOU) with Global Energy Ventures (GEV) of Australia to cooperate on the inclusion of Wärtsilä propulsion systems in GEV’s compressed hydrogen (C-H2) ships.

The cooperation aims at advancing GEV’s Approval in Principle (AiP) application for its new 430-ton C-H2 vessel. It is also intended to demonstrate the availability of a highly efficient, low-emissions propulsion system for the vessel.

The Aussie developer of global integrated marine compressed natural gas (CNG) projects anticipates that detailed engineering will be lodged as part of the American Bureau of Shipping (ABS) Approval in Principle process in early 2021.

The H2 Ship is designed to have a storage capacity of up to 2,000 tonnes (23 million m3) of compressed hydrogen.

The containment system will include ambient temperature hydrogen at a target pressure of 3,600 psi (or 250 bar).

The ship’s containment system won an AiP from ABS earlier this year.

The system is made up of two large (20 metre diameter) tanks, contained within the hull of the ship, that will store ambient temperature hydrogen at an operating pressure of 3,600 psi (250 bar) and will have a combined containment capacity of 2,000 tonnes of hydrogen.

GEV will now work with ABS to progress the various engineering steps towards Full Class Approval, i.e. approval for construction, similar to that achieved by GEV for its CNG Optimum ship.

“We look forward to working closely with Wärtsilä on this project. We have shown that C-H2 shipping is ideally suited for exporting green hydrogen with a lower delivered cost and having a technology leader such as Wärtsilä with us, we can deliver a shipping solution that is completely sustainable,” says Martin Carolan, CEO, GEV.

“This project is an important steppingstone along the journey towards a decarbonised maritime industry, something that Wärtsilä is fully committed to supporting. We are actively developing propulsion alternatives that can utilise future carbon-neutral fuels, raise efficiency levels, and which significantly improve environmental performance,” says Petteri Saares, Sales Director, Wärtsilä Marine Power.

Compression has been singled out by the industry as the preferred solution for marine hydrogen transport but is often overlooked due to its lower volumetric energy density. The duo believes that the C-H2 project will eliminate the technical barriers and deliver a solution which is superior to other transport alternatives.

GEV is in discussions with parties to evaluate the C-H2 supply chain for future hydrogen export projects, while also identifying suitable sites for the development of its own pilot-scale renewable green hydrogen project for a fully integrated green C-H2 supply chain.