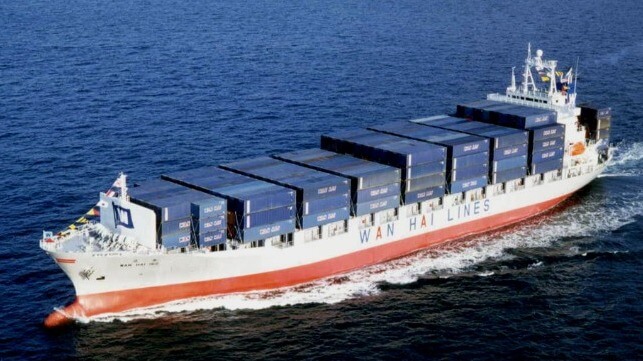 Wan Hai has become the second major carrier recently fined by the Federal Maritime Commission over violations of the Shipping Act of 1984 as it relates to charging detention fees on containers. The Taiwanese shipping company agreed to an $850,000 civil penalty and remedial actions while not admitting to violations. The settlement in the case which was filed at the end of 2021 is part of the FMC’s increased attention to the business policies of the major carriers in response to ongoing complaints from shippers over unfair and excessive charges.

“Between May 18, 2020 and April 22, 2022 Wan Hai knowingly and willfully failed to establish, observe, and enforce just and reasonable regulations and practices related to or connected with receiving, handling, storing, or delivering property, by unreasonably refusing to waive detention charges in violation of the Shipping Act of 1984,” contends the FMC in the settlement agreement accepted by Wan Hai. The case involved the practice of charging detention fees on containers that were not returned on time at the specified locations at the ports of Los Angeles and Long Beach. The FMC cited 21 instances with the invoices ranging between $125 and $1,550 per container.

Without admitting that any of its practices constituted a violation of the Shipping Act, Wan Hai agreed to modify its practices and address the conduct that was the basis for the FMC’s claims. The carrier agreed to stop collection attempts for those detention charges, while also publishing information on its website on how to submit future requests for waivers or refunds of detention charges. They will also publish a list of locations for authorized returns of empty containers, clarify that the list is an advisory, and conduct training for all employees involved with billing or disputes of detention and demurrage charges.

The $850,000 settlement comes just two weeks after an administrative law judge imposed a civil penalty of $822,000 against Hapag in a similar case. The recurrent issue has become the complaints of truckers that they are not able to make reservations or are being turned away from the return locations specified by the carriers. Terminals and container yards have become overloaded with empties creating backlogs for the motor carriers who are then unable to meet the dates supplied by the carriers. To rectify the issues, the judge also provided a cease and desist order again Hapag over the charges while also ordering training for employees.

The FMC has issued multiple communications providing guidance to the carriers on D&D fees, but as port congestion increased so did the number of complaints from shippers and truckers of unreasonable policies and fees. The FMC has increased its efforts to address these complaints and they have said that they are expecting an increased number of filings in the coming months from shippers and truckers.

D&D fees have long been contested but became a focal point for the complaints as port congestion grew. Those complaints contributed to the current legislative initiatives in the U.S. Congress to reform the Ocean Shipping Act and recently the FMC’s National Shipper Advisory Committee also made a recommendation to increase FMC oversight on D&D charges. The committee consisting of importers and exporters recommended that the FMC restrict carriers’ ability to pass along terminal dwell fees as well as take responsibility for the oversight of demurrage charges at ports and from the railroads.