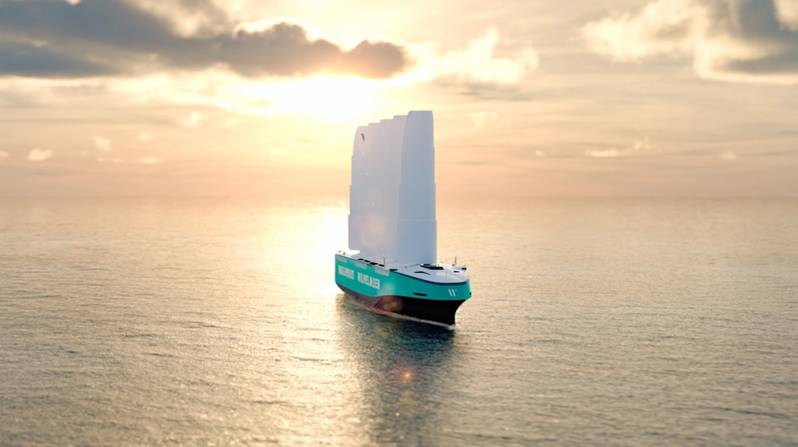 Wallenius Wilhelmsen revealed plans for the first full-scale wind powered RoRo ship which it hopes to have in service within the next five years. Building on concept designs announced last fall, the company has added in its commercial expertise to produce a design that it believes could be ordered in 2022.

Known as the Orcelle Wind, the RoRo vessel will have a length of approximately 720 feet and a beam of approximately 131 feet. It will have the capacity to carry 7,000 vehicles, transport heavy machinery and breakbulk products, at speeds of 10 to 12 knots under sail. The standard Atlantic voyage would be approximately 50 percent longer requiring 12 days versus the current eight day crossings.

The primary propulsion would be from the wind, but the vessel will also have a supplemental power system that could be used to increase the speed or when maneuvering into and out of ports. The result would be a 90 percent reduction in emissions versus conventional RoRo vessels.

“Orcelle Wind will be our technical and operational testbed for zero-emission innovation, where we can assess and develop various zero-emission fuels and technology,” says Erik Noeklebye, EVP and COO of shipping services at Wallenius Wilhelmsen.

The concept designs for the world’s largest sailing ship, a wind-powered RoRo known as the Oceanbird, were developed in a Swedish collaborative project between Wallenius Marine, KTH (Royal Institute of Technology), and SSPA and supported by the Swedish Transport Administration. It features futuristic sails using the same level of aerodynamic technology as airplane wings. They are designed to telescope from a minimum height of 150 feet above the waterline to permit the ship to pass into harbors to a maximum of 262 feet permitting the ship to operate at optimal conditions or reef the sails in high wind conditions. At maximum height, the wing sails would be twice the height of today’s largest conventional sailing vessels. The rigging is made of steel and composite materials and turns 360 degrees to catch the wind in an optimal way.

Wallenius Wilhelmsen is taking the concept forward by applying its experience in the RoRo to the design. They have enhanced the commercial aspects of the vessel addressing its cargo and storage areas, and assessing areas for operation. They report that plans are in place to have a design ready for contracting with a shipyard by mid-2022, with the finished vessel expected to set sail by 2025.

The next step in the process will be a comprehensive viability evaluation of the design and the shipbuilding requirements. To pass muster, Wallenius Wilhelmsen says the Orcelle Wind must satisfy regulatory standards relating to safety and technical performance. Operational needs must also be met, such as the suitability for deployment on multiple global trade lanes and the ability to maneuver in port in bad weather.

“It will take the dedicated collaboration of our world-class customers, partners, and employees to make such a bold initiative as Orcelle Wind succeed,” says Craig Jasienski, CEO of Wallenius Wilhelmsen. “More than just evaluating the concept, we are committed to making this a success. Since 2008, we have been able to reduce CO2 intensity by 33 percent, which is a significant step. But the journey towards zero emissions requires great strides forward. We believe Orcelle Wind is one of them.”

Committed to sustainable logistics, Wallenius Wilhelmsen believes this project can take an active role in steering the industry towards a zero-emissions future. Wallenius Wilhelmsen says that success will be heavily dependent on partnerships with customers and whether there is a commitment in the market to adopting radical and innovative measures to drastically reduce the environmental footprint of outbound supply chains.