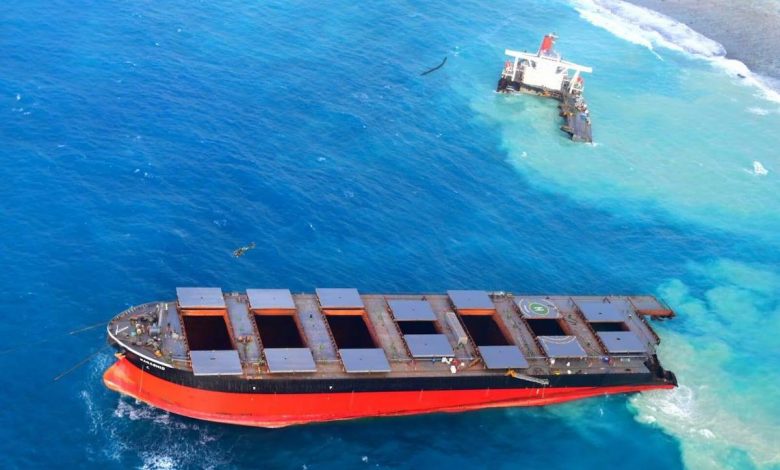 The bow section of the Wakashio bulk carrier is being towed eight nautical miles to an area with 2 km depth with its hatches open, while the stern of the Japanese vessel remains on a reef off Mauritius, with salvors waiting for the bad weather to pass.

The Panamanian-flagged ship grounded on July 25 and split in two on Saturday. It has quickly become the worst ecological crisis the Indian Ocean island republic has faced.

The latest satellite analysis of the bunker spill from the huge 203,000 dwt ship shows the 8 sq km oil slick has washed up in the UNESCO protected Blue Bay Marine Park, as well as the UNESCO protected Pointe d’Esny Mangrove Forests and the Ile aux Aigrettes nature preserve for endangered species.

The site of the spill in Blue Bay Marine Park is now directly over the site of the 1,000 year old brain coral that was the largest and oldest in the Indian Ocean.

The Wakashio, owned by Nagashiki Shipping, is insured by Japan P&I. Insurance experts are now expecting the bill for the clean-up operation from this disaster to top $500m.

Sebastien Lecornu, minister for France’s overseas territories who visited Mauritius over the weekend, said yesterday he believed the clean up operation would involve “at least 10 months of work”.

“The 1,000 tons of oil and diesel that leaked close to one of the greatest marine treasures of Mauritius have destroyed the habitat. Recovery will take decades. The disaster will occupy Mauritius for years to come,” Bueger, a director at maritime security network SafeSeas, said.