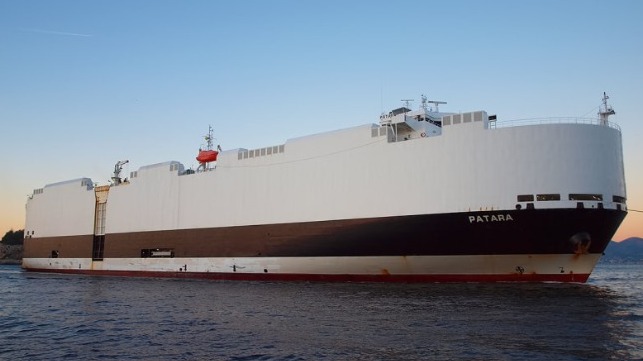 In a sign of the increasing sensitivity of shippers to the carbon footprint of their supply chain, carmaker Volkswagen has contracted with biofuel manufacturer GoodFuels to supply non-fossil-fuel bunkers to a chartered car carrier.

The Depth RoRo-operated vessel Patara was recently bunkered with 100 percent straight bio-fuel oil manufactured at GoodFuels’ plant. The change will reduce the ship’s carbon emissions by 85 percent and eliminate all sulfur emissions, according to GoodFuels. The Patara carries Volkswagens to customers on a circuit connecting Emden, Germany; Dublin; Santander; and Setubal, Portugal. A second ro/ro will be added to the alternative-bunkers arrangement soon, according to VW.

“We are the first automaker to make widespread use of this fuel. This way, we reuse waste oil in an environmentally compatible way. With 85 percent lower CO2 emissions than with conventional fossil fuels, the contribution to climate protection is enormous,” said Thomas Zernechel, the head of Volkswagen Group Logistics.

GoodFuels is supplying VW with a sustainably sourced biofuel recipe made from certified feedstocks labeled as waste or residue. BFO ‘drops in’ to normal fuel tanks, meaning no hardware changes are needed. This makes GoodFuels one of the few existing options to take an existing ship and switch it over to fossil-free operations. The company says that it will continue to look at partnership opportunities in the ro/ro segment.

The auto industry is under pressure to reduce its environmental impact – particularly Volkswagen, which admitted in 2015 to engaging in a scheme to evade pollution control testing in the United States. In certain VW TDI models, a software tweak allowed VW-made diesel engines to run in a compliant manner during testing, then switch to a leaner fuel injection setting in everyday driving, often improving real-world fuel economy. This “defeat device” also had the effect of increasing NOx emissions far above legal limits. Volkswagen ultimately paid civil penalties totaling $4.7 billion to settle with the federal government and the California Air Resources Board. Significant portions of that settlement (and additional state-level agreements) have gone to pay for port emissions reduction investments, like all-electric cargo handling equipment.

Volkswagen has  in the EV segment in the years since. One of its hatchback models is now the best-selling electric vehicle in Europe. The firm’s long-term plan is to achieve net-zero carbon emissions by 2050.