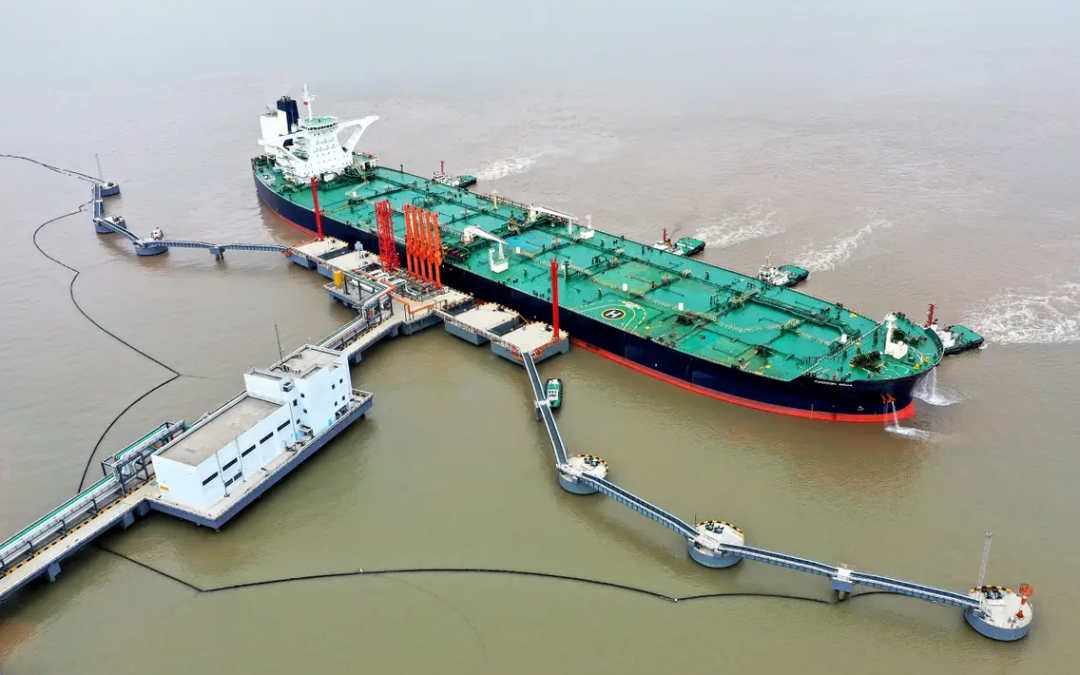 When the supertanker Young Yong sailed to the Chinese port of Qingdao in September last year, it had quality certificates for its cargo stating it was transporting Malaysian crude oil, according to the documents reviewed by Reuters.

But satellite images and photos show the Chinese-owned ship had loaded the oil four months earlier in Venezuela, an OPEC nation in South America under U.S. oil sanctions.

The Young Yong is one of three vessels identified by Reuters that were chartered by little-known companies to export Venezuelan oil and used false documents to conceal its origin, according to shipping documents and 11 sources with knowledge of the trade. Two of those tankers, including the Young Yong, were designated this month by U.S. authorities for violating sanctions on Iran, one of Venezuela’s closest allies.

Six shipping and oil trading specialists told Reuters the use of false documents to conceal cargoes originating in sanctioned countries including Venezuela and Iran has increased compliance risks for oil and trading companies, amid a proliferation of international sanctions. “It’s now becoming clear you cannot trust certificates of origin even when they come with official government documentation,” said Cari Stinebower, a U.S.-based partner with law firm Winston & Strawn, who advises oil and trading companies how to comply with sanctions. The Young Yong was one of several tankers named by the U.S. Treasury on Nov. 3 as part of a “smuggling network” that has used forged documentation to ship Iranian oil to finance Iran’s Revolutionary Guards and Hezbollah. The Treasury designated the tanker as a frozen asset and placed its owner, Marshall Islands-registered Technology Bright, under sanctions. The U.S. Treasury declined to comment on the involvement of the Young Yong or the other vessels identified by Reuters in shipping Venezuelan crude. Stinebower, who previously worked as a legal counsel for the U.S. Treasury’s sanctions enforcement arm OFAC, said the use of false documents to conceal the origin of cargoes was pioneered by Iran to avoid U.S. sanctions. Citing cases she has worked on as a commercial lawyer, Stinebower said it appeared the technique was now being adopted to transport Venezuelan oil but she declined to provide further details.

Venezuela’s oil ministry and state-owned oil company PDVSA did not respond to requests for comment. Iran’s mission to the United Nations in New York also did not respond to Reuters questions. PDVSA documents reviewed by Reuters said a vessel named the Comuna loaded 1.98 million barrels of oil in the Venezuelan port of Jose from May 11 to 21 last year.

However, independent monitoring company TankerTrackers.com, which specializes in analyzing vessel movements for insurance and shipowners’ research, used satellite images and photos to identify the tanker as the Young Yong.

The images show the vessel’s name had been painted over but the tanker is identifiable because of the distinctive white arches flanking its bridge, the position of the cranes on its deck and the shape of its funnel, said Samir Madani, TankerTrackers.com’s owner.

When the Young Yong set sail from Venezuela after loading the oil, its location transmitter showed it departing from the West African port of Lome.

The Young Yong then stopped near Malaysia between early July and August 2021. While there, on July 8, it obtained a quality certificate from Singapore-based laboratory Saybolt that identified its cargo as Malaysian heavy crude – which has similar characteristics to Venezuela’s Merey 16 crude grade. The certificate measures aspects of oil – such as its density and its levels of sulfur and metals – that allow a buyer to be sure a cargo is within a contract’s specifications.

Saybolt’s U.S. owner, Core Laboratories (NYSE:CLB) N.V., said in a statement to Reuters that it had certified the crude as Malaysian heavy oil blend based on documentation it received from the client and its analysis of the quality of the oil. The company said it had no reason to doubt this was the case. It did not identify who the client was.

Indonesian authorities said in early November that the Young Yong had run aground off the Riau Islands on Oct. 26. UANI said it was carrying Venezuelan fuel oil when it ran aground and was likely trying to reach Nipah, a popular ship-to-ship transfer hub near Indonesian waters, according to satellite pictures and vessel tracking, analyzed by the advocacy group.

Christian M. Ingerslev, chief executive of Maersk Tankers, said the proliferation of sanctions had led to “separate fleets and separate markets run in parallel”: some vessels were operating off-the-radar to service sanctioned countries, sometimes without proper insurance, he said.

London-headquartered ship broker Braemar PLC estimated that the total fleet servicing Iran and Venezuela, despite U.S. sanctions, consists of more than two hundred tankers, including some 82 supertankers like the Young Yong that can carry up to two million barrels of oil each.

The United States imposed oil trading sanctions on Venezuela in 2019 after calling Maduro’s re-election the previous year a sham. Washington has maintained pressure on the socialist leader to hold fair elections and release political prisoners: it said last week it could relax sanctions if there is progress in talks between Maduro’s government and the opposition.

The use of a wide array of tactics – including false documentation, fake vessel names and ship-to-ship transfers of cargoes at sea – has enabled Venezuela to export more than 360 million barrels of crude and fuel since the imposition of U.S. sanctions, according to Reuters calculations based on PDVSA’s internal documents and ship tracking data.

That represents more than two-thirds of Venezuela’s total oil exports from 2019 through October 2022. The remainder went either directly to its ally Cuba or to other destinations in the Caribbean and Europe under exemptions to U.S. sanctions, according to the Reuters calculations.

PDVSA did not respond to a request for comment on those figures. When asked about Reuters’ findings about the use of false documentation by vessels carrying Venezuelan crude, a U.S. State Department spokesperson said: “our Venezuela sanctions remain in effect”.

PDVSA documents from May 2021 listed Yunshu Maritime Ltd as the charterer of the Comuna – the name used by the Young Yong to load Venezuela crude that month. The PDVSA shipping documents and invoices for the cargo dated September 2021 did not provide contact details for Yunshu Maritime. Reuters was unable to find a website or address for the company.

Yunshu Maritime was also the charterer for another supertanker that loaded Venezuelan oil in May 2021 under the name Joy, PDVSA’s loading schedules showed. Using satellite images and photos, TankerTrackers.com identified that vessel as the Panamanian-flagged tanker Adisa, which was also blacklisted this month by the U.S. Treasury for transporting Iranian oil.

The Treasury said the vessel is controlled by a company owned by Viktor Artemov, a Ukrainian national who oversees a network of cover companies used to sell sanctioned Iranian oil and channel the proceeds to the Revolutionary Guards and Hezbollah.

Artemov, who has been placed under U.S. sanctions, did not respond to requests for comment.

The Adisa set its location signal to make it appear that it set sail from Africa in early June 2021 with Malaysia as its destination. The vessel made a stop in Malaysia between July and early September and then switched its transponder off for about a week before reappearing near Qingdao in mid-September, where it discharged, according to ship tracking data.