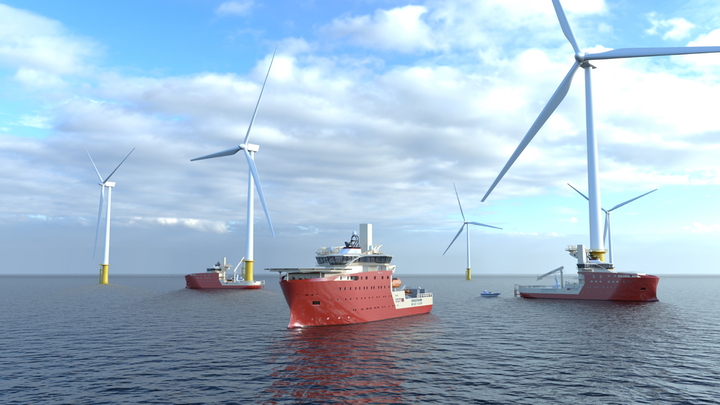 Norwegian shipbuilder Vard, a subsidiary of Fincantieri, has won a contract for the design and construction of three wind farm Service Operation Vessels (SOV) for the Aberdeen-based company North Star Renewables.

The vessels, developed in close cooperation with North Star, will be built at the Vung Tau shipyard in Vietnam for delivery in 2023. They will be deployed in the 3.6GW Dogger Bank Wind Farm, currently under construction more than 130km off the North East coast of England in the North Sea, due to become the world’s largest offshore wind farm upon completion.

The SOVs will each have a height adjustable wave-motion compensated gangway with elevator system, height adjustable boat transfer system, and 3D-compensated crane for cargo transfer. Propulsion will be a hybrid diesel-electric and battery solution for carbon-neutral operations in the future.

Vard says the contract will strengthen its position in the international wind vessel sector with the offshore renewable energy sector currently in a transition phase, shifting from a European-only industry to a global market.

North Star announced last month that it had been awarded contracts worth an estimated £270m to design, build and operate the three SOVs for maintenance of the Equinor-operated wind farm for a 10-year period, with an option for three one-year extensions. This is the first contract in the renewables sector for the company, a 40-year veteran of the North Sea oil and gas industry.

The SOVs will be operated out of a new base that North Star will establish at Port of Tyne, near Newcastle, thereby creating 130 new full-time UK-based crewing and onshore jobs to add to the company’s existing 1,400 strong workforce.