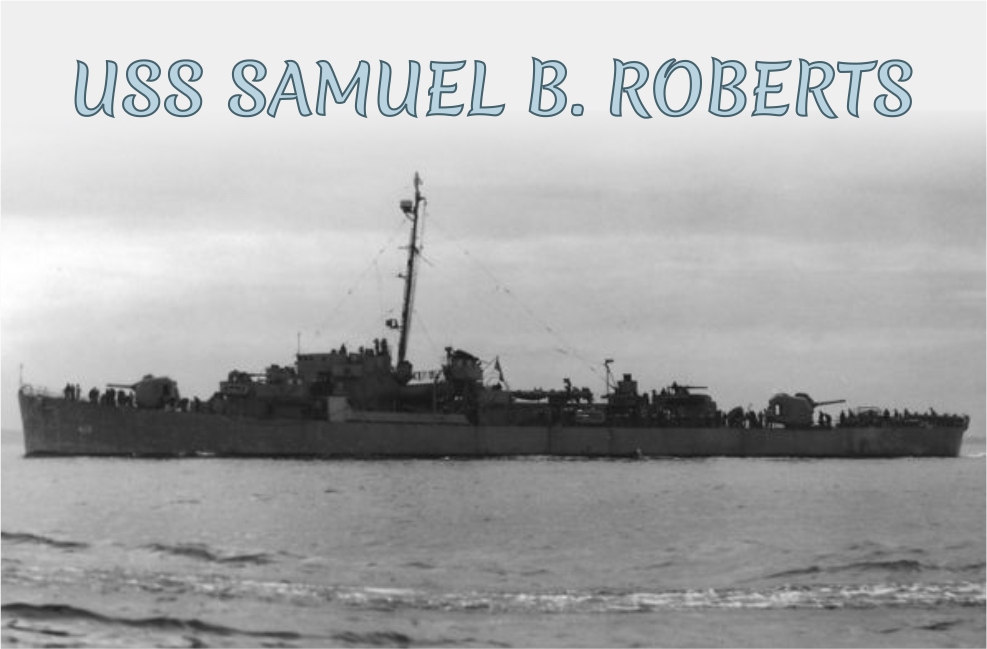 The USS Samuel B. Roberts (DE-413) was the first of three U.S. Navy ships of the same name that served in World War II. It was a destroyer escort of the John C. Butler class.

During the period May 21, 1944, to June 19, 1944, Samuel B. Roberts conducted a trial sail off Bermuda. On July 7, 1944, Roberts left the Boston Navy Yard and headed towards Norfolk, Virginia. Later that day, the ship probably ran into a whale, which caused her port propeller to break. By July 11th, repairs were finished. On July 22, Samuel B.Roberts left Norfolk, and on July 27, he sailed through the Panama Canal. On August 10, she joined the Pacific Fleet at Pearl Harbor.

The Sammy B, known as “the destroyer escort who battled like a battleship,” attacked a fleet of imperial Japanese naval ships, including the Yamato, the biggest battleship ever built, before being destroyed by gunfire in the Philippine Sea. Among its 224 crew members, 89 were killed.

The destroyer escort USS Samuel B. Roberts (DE-413), which sank in the Battle of Leyte Gulf in October 1944, was found at its wreck location. The ship’s wreckage was discovered off the coast of the Philippines, and the Navy now regards the location as a “hallowed war grave.” The wreck of the destroyer escort was found at a depth of 6,895 meters, as per a statement released on June 24, 2022, by Victor Vescovo, an underwater technology business, Caladan Oceanic, and EYOS Expeditions. Rear Adm. Samuel Cox, director of the Naval History and Heritage Command, retired, confirmed the report.

These operations during the Battle of Samar by the considerably smaller American ships effectively shielded the American invasion force during its landings at Leyte Gulf against the Japanese fleet’s attack. In the battle, 89 Samuel B. Roberts crewmen lost their lives. Lt. Cmdr. Robert Copeland, his commander, said that 120 soldiers were saved. “The bravery of the crew serves to inspire U.S. Navy soldiers today,” Cox said in the statement.

“I always remain in praise of the extraordinary bravery of those who fought in this battle against truly overwhelming odds-and won,” retired naval officer Vescovo said following the Navy’s approval that the wreckage was also that of “Sammy B.” The final battle fought in the Leyte Gulf was the Battle of Samar. The naval battle at Leyte Gulf is frequently regarded as the biggest in history.

The captain, Samuel B. Roberts, who was awarded the Navy Cross for his efforts at Guadalcanal, was the inspiration behind the naming of the destroyer escort, which was laid down in Texas in December 1943.

The USS Samuel B. Roberts (FFG-58), an Oliver Hazard Perry-class guided-missile destroyer, was carrying a plaque honoring the crew of DE-413 when it crashed with a bomb in the Persian Gulf in April 1988, hitting a 15-foot hole in the ship. The crew worked for five hours to drain water and put out flames in order to save the ship with the keel broken.

The plaque is currently on display at the Washington Navy Yard’s National Museum of the United States Navy. This shipwreck is deeper than the USS Johnston (DD-557), which was also lost in the Battle of Samar and was found by Vescovo last year. Many of the evidence, including sonar maps, movies, and pictures, will once again be sent to the Naval History and Heritage Command. Vescovo operated the submarine Limiting Factor with French sonar specialist Jeremie Morizet. They spotted the wreck lying on an incline. It was split into two parts that were spread apart by roughly 10 meters.

In a statement, Kelvin Murray, head of mission operations and undersea projects for EYOS, said that “Everyone has joined together to discover the last resting place of this dynamic ship using a combination of investigative work and innovative technology.”

On June 17, 1944, the USS Gambier Bay (CVE-73) and escort carrier “Sammie B.” went missing. The major wreck site wasn’t found but particles from a three-tube torpedo launcher from the destroyer escort were positively identified the next day.

An EYOS press statement states that the investigation also made use of a Kongsberg EM-124 deep-ocean ship-mounted sonar for sea surface and reflectivity evaluation. The French company Deep Ocean Search created a first-of-its-kind side-scan sonar, especially for Caladan, and it also used a Kongsberg Mesotech 1,000 high-frequency sonar with a limited range.

The team performed two dives to look for Gambier Bay, which was sunk in the conflict, during the mission that lasted till June 24, 2022. According to the EYOS announcement, investigations were unsuccessful due to the lack and inaccuracy of data identified when the carrier came out after the time limits.

In order to launch new missions in the Western Pacific, Caladan and EYOS will return to Guam. Four scheduled dives at Challenger Deep were part of these missions. When the Navy’s deep-sea Trieste made an earlier voyage to the Mariana Trench, Vescovo broke its record of depth.

A torpedo strike and multiple shell hits on bigger enemy warships were made by Samuel B. Roberts as she sailed through oncoming rounds before being destroyed. She is the deepest wreckage that has been found as of June 2022. Her last known survivor passed away on March 20, 2022.