US Offshore Wind – Jones Act Installation Vessel On The Way 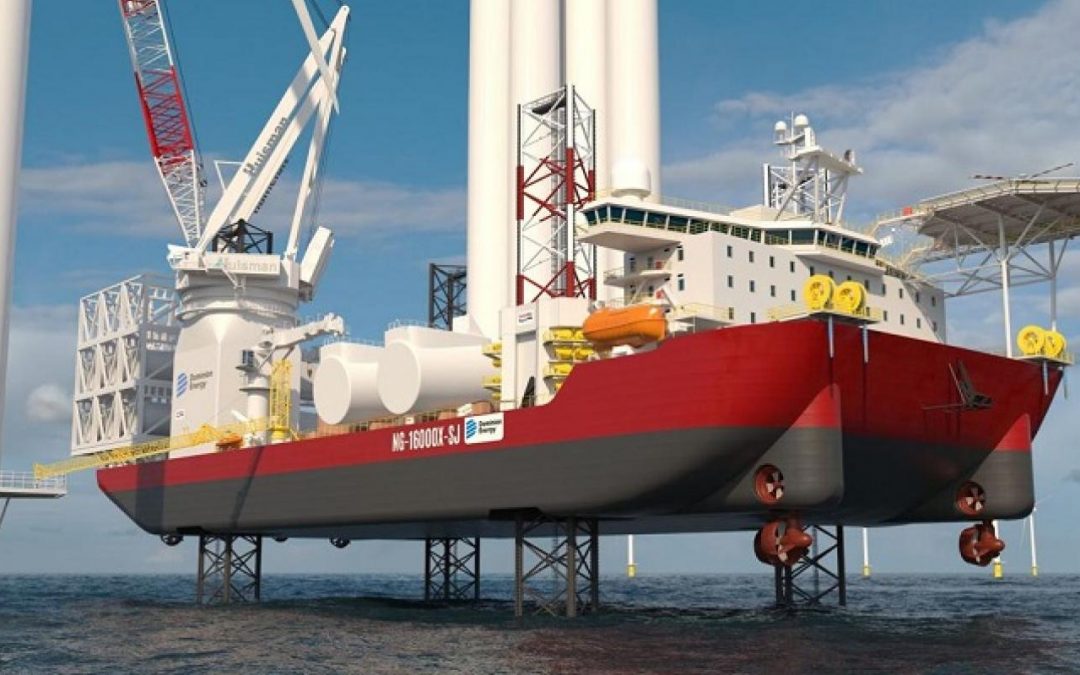 In a prepared release, a top executive at Dominion Energy said: “Dominion Energy is proud to be leading a consortium of respected industry participants in the construction of the first Jones Act compliant offshore wind turbine installation vessel, which will provide significant American jobs, and provide a reliable, home-grown installation solution with the capacity to handle the next generation of large-scale, highly-efficient turbine technologies. This will better enable the offshore wind industry to bring clean, renewable energy to customers in the US”

The announcement from Dominion comes two months after plans for a Service Operations Vessel (SOV), to be built in shipyards owned by Edison Chouest and to be employed by Ørsted / Eversource, an energy provider serving the northeastern US.

This past summer, in a demonstration project, Dominion deployed two 6 mW turbines in a site approximately 27 miles off the coast of Virginia Beach (in the Norfolk- Hampton Roads area), with construction handled by Ørsted.

These are the precursor to the much larger Coastal Virginia Offshore Wind (CVOW) project, with plans for 2,600 mW (2.6 gW) on the drawing board in the lease area, hoped for by 2026. An estimated 220 turbines (12 mW each) would be deployed, keeping the WTIV busy, if the project comes to fruition as planned.

The new vessel, as yet un-named, with an anticipated 2023 delivery, is expected to be based at Hampton Roads. According to the release, “The overall project cost, inclusive of construction and commissioning and excluding financing costs, is estimated to be around $500 million. Financing for the vessel has been arranged through a lease financing agreement with leading global banks. Construction and financing costs will not impact Dominion Energy Virginia’s customers’ bills.”

They add: “The vessel’s hull has a length of 472 feet, a width of 184 feet and a depth of 38 feet, making it one of the biggest vessels of its kind in the world. It has accommodations for up to 119 people. The vessel is designed to handle current turbine technologies as well as next generation turbine sizes of 12 megawatt or larger and will also be capable of the installation of foundations for turbines and other heavy lifts.”

The main crane, to be fabricated by Huisman, will have a lifting capacity of 2,200 tons. Seajacks, which operates jack-up WTIVs in Europe and Asia, will be assisting Dominion Energy in the construction phase, and is set to provide assistance with “operations oversight.”

In the absence of “Jones Act qualified”  installation vessels, equipment from US ports may be barged out to a non-US  fixed installation vessel, which, if stationery, complies with Jones Act restrictions – as was done in the first US offshore windfarm, the 30 mW Block Island Wind.

In the case of the CVOW, the turbines were installed by Jan De Nul’s Vole au Vent, with materials staged in Halifax, Nova Scotia- in a workaround of the Jones Act. As the CVOW is built out, during the mid-2020’s, materials can be staged out of ports in the US. The Hampton Roads area, like other ports up the coast, is set to make a major commitment to supporting offshore wind.