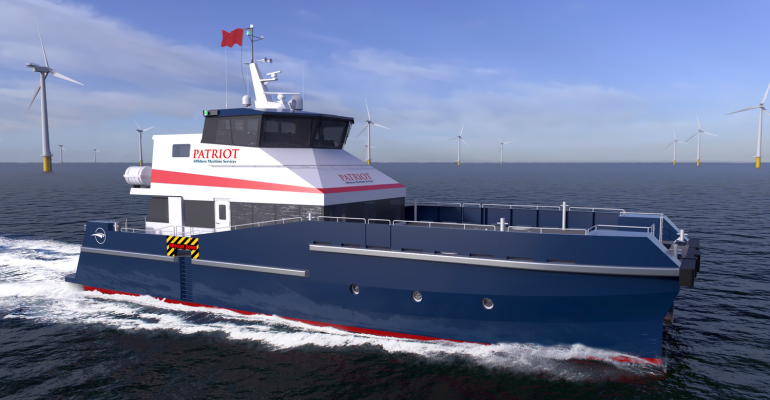 The mantra “30 by 30” —30 gW of electricity generated from offshore wind by 2030—continues to provide tangible benefits in the form of new orders for shipyards.

Most recently, the developers of the Vineyard Wind project (the first offshore wind project approved under the Biden administration, following a wind energy pushback during the Trump years), have now signed a charter deal with local owner Patriot Offshore Maritime Services (POMS), headquartered near New Bedford, Massachusetts. The Vineyard Wind array will see 62 GE turbines with a total capacity of just over 800 mW, placed in waters about 15 miles south of Martha’s Vineyard, and will supply power to Cape Cod and other parts of Massachusetts.

The vessel charter is part of a new dynamic at play in the business of offshore wind, that of “local content”. POMS, formed in 2021 to provide crew transport service to the burgeoning wind business, is based in New Bedford, Massachusetts—best known as a fishing port with a history going back to the days of whaling ships in the 1800s. POMS seeks to build new vessels, but also hopes to be active in “…the conversion of existing US flag vessels, such as platform supply vessels, crew boats and personnel accommodation vessels into purpose built, dedicated, offshore wind support vessels.” Initially, the new CTV will be based in New Bedford, later transitioning to Vineyard Haven (on the island of Martha’s Vineyard), for the maintenance phase, once construction is completed.

The new vessel will be built by Gladding-Hearn Shipbuilding in Somerset, Mass.- well known in the passenger ferry business around the US East Coast. The new CTV, a catamaran 27 m in length that will be capable of transporting 24 service and technical personnel out to the array, is based on an established design from Incat Crowther. According to Vineyard Wind: “Upon delivery during mid-2023, the CTV will be deployed directly into construction, transporting essential personnel and equipment in support of the project. Vineyard also has the option to charter additional CTVs from Patriot as part of their marine logistic strategy.”

The developer adds that: “Vineyard Wind has also signed a contract with American Offshore Services for a second CTV that will be built by Blount Boats…” in neighboring Rhode Island. Blount has been active in passenger vessels, including a CTV that serves the 30 mW Block Island Wind array, and as well as in commercial workboats.

Another important business dynamic is at play, where established maritime transport providers are entering into the US offshore wind arena, which will benefit from their expertise. POMS is a member of the recently formed Liberty Green Logistics (LGL) organization. The long-established Liberty Logistics (tied to Liberty Maritime), which handles shipments for private as well as defense customers, recently set up LGL to bring its expertise to the offshore wind industry.

Vineyard Wind is a joint venture of fund investor Copenhagen Infrastructure Partners and Avangrid Renewables, a US entity tied to European energy giant Iberdola. According to the company, deliveries of electricity from the first phase of the Vineyard Wind project, with cabling coming ashore near Hyannis, Mass. on Cape Cod, will begin in 2023.