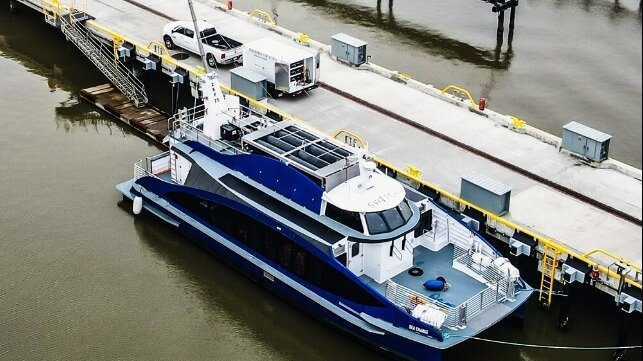 In the race to develop and operate hydrogen fuel cells for commercial vessels, the U.S. effort known as the Sea Change, a catamaran ferry to operate in San Francisco Bay, reports that it has achieved additional key milestones. The vessel, which was launched in August, has completed its first fueling with hydrogen gas for a vessel in the United States and has received critical approvals as it continues on track to enter service in 2022.

Switch Maritime, which built the vessel as the first in a series it plans to develop with hydrogen propulsion, reported that the Sea Change completed its first hydrogen fueling. At All American Marine shipyard in Bellingham, Washington, the Sea Change received hydrogen into its 242 kg tanks on the upper deck. The fueling during sea trials is being handled by West Coast Clean Fuels, which Switch retained to develop and permit the end-to-end fuel supply chains that will deliver hydrogen to the Sea Change, as well as BayoTech, for high-pressure gaseous hydrogen delivery using transport trailer-to-ship transfer to Sea Change during sea trials in Washington.

The Sea Change uses a first-of-its-kind maritime hydrogen and fuel cell system designed and developed by Zero Emission Industries. The company also developed the system demonstrated during the fueling on November 18 that allows the vessel to receive gaseous hydrogen directly from a hydrogen truck. The fuel loaded in the vessel’s tanks included green hydrogen, produced in California by an electrolyzer powered with renewable solar power.

“While it’s taken us years to get to this point, the timing couldn’t be better,” says Pace Ralli, CEO of Switch Maritime. “In this moment, our nation is more committed than ever to making the transition to a carbon-free economy. Hydrogen will play a major role in that future, and major players in the maritime industry are ready to decarbonize. We are grateful to all our partners, and proud to play a small role in accelerating the widescale adoption of hydrogen power. Hopefully, this is just the first domino to fall.”

The fueling follows the regulatory approval in October by the United States Coast Guard of the hydrogen powertrain and storage systems onboard the Sea Change, representing the culmination of years of cooperation with the USCG focused on safely integrating hydrogen power and storage systems on passenger vessels. According to the companies, the achievement of this significant milestone they believe will unlock the possibility of many future deployments of similar hydrogen power systems on all vessel types – including ocean-going containerships.

The new 75-passenger ferry, which is a 70-foot catamaran ferry designed by Incat Crowther, is equipped with a hydrogen fuel cell system from ZEI. The system includes 360kW of fuel cells from Cummins and 242kg of hydrogen storage tanks from Hexagon Purus. A 600kW electric propulsion system from BAE Systems includes 100kWh of lithium-ion battery storage from XALT. It was built at All American Marine and launched in August.

The Sea Change is unique in that it uses gaseous hydrogen in its fuel cell. Other demonstrate vessels are burning liquid hydrogen in a more traditional combustion engine. Switch says the Sea Change will use the hydrogen in fuel cells producing electricity to power electric motors for distances up to 300 nautical miles and speeds up to 20 knots. That will give the vessel similar capabilities to similar diesel-powered vessels.

Having successfully performed the first hydrogen fueling, the Sea Change is now performing final operational sea trials before delivery from the shipyard and before starting operations in the California Bay Area in Q1 2022.

Switch’s vision is to achieve a fully zero-carbon fueling supply chain of green hydrogen, which is currently in short supply in the U.S. Building more and larger vessels that demand large volumes of hydrogen offtake the company believes will increase green hydrogen production volumes, and drive the cost of hydrogen lower than diesel, further advancing the rollout of hydrogen-fueled fleets.