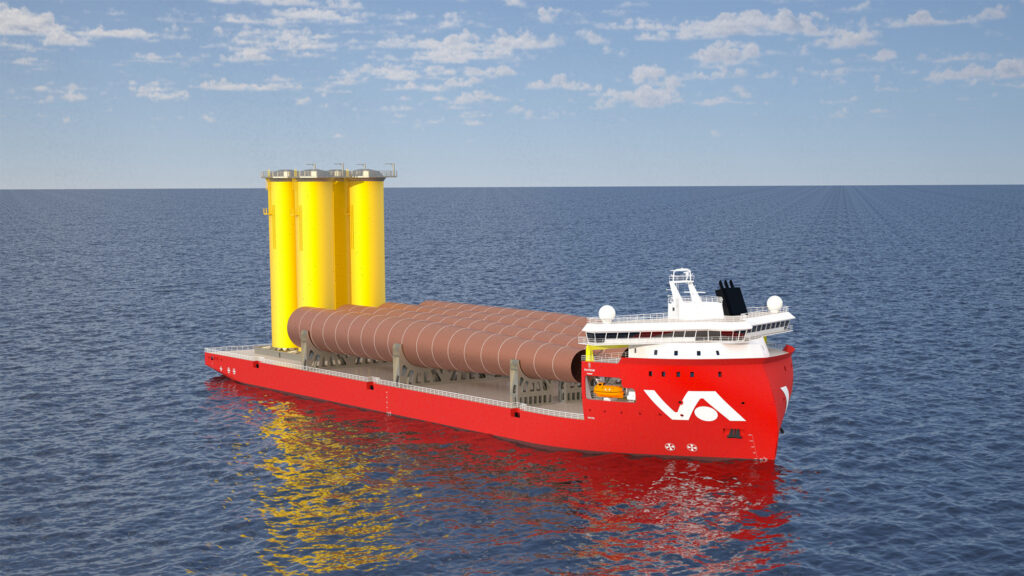 Singapore-based Vallianz Holdings Limited has contracted Ulstein Design & Solutions BV for the development of a hybrid heavy transport vessel (HTV) that will serve the growing transport demand in the offshore wind industry as well as for LNG modules and offshore structures.

The 173.8-metres long vessel, which will be prepared for the installation of zero-emission technology, will feature a hybrid power system consisting of dual-fuel engines and a battery energy storage system.

The HTV’s electric battery system will be provided by Canada-based Shift Clean Energy, while Bureau Veritas will be responsible for the overall classification of the vessel.

With a deck area of over 6,000 square metres and a draught of 7 metres, the DP2 vessel is optimised to support Vallianz’s business case for not only transporting offshore wind structures such as monopiles, jackets, transition pieces, and turbine blades but also carrying out floatover operations of offshore structures, said Ulstein.

According to the developer, the new HTV, a customised ULSTEIN HX120 design, will feature ULSTEIN’s X-BOW®, contributing to reduced energy consumption, as well as to more comfortable and safer operations when sailing through waves.

Construction is expected to take up to 26 months, with planned completion by the end of 2024.

In addition to the HTV, Vallianz also signed a Memorandum of Understanding (MoU) with Royal IHC a few months ago for the design and construction of a next-generation service operation vessel (SOV) for the offshore wind market.

“In view of the anticipated increase in the size of monopiles and other components for offshore wind farms over the coming years, we believe there will be growing demand for newer generation vessels like our HTV, which can help to facilitate faster installation speed, better project economics and a reduction in carbon footprint. The addition of this HTV will also complement and expand the group’s existing “Holmen” fleet of heavy lift transport vessels”, said Osman Ibrahim, Chairman of Vallianz.