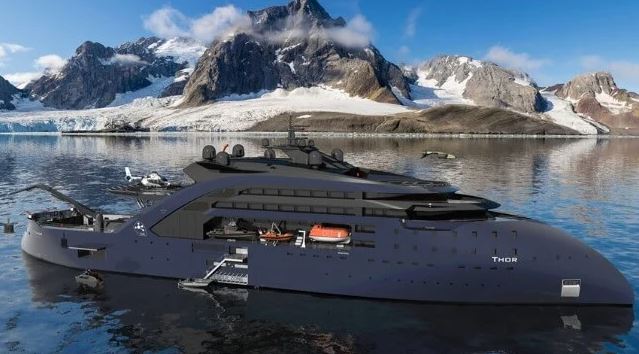 Norway’s Ulstein Group presented its unique vision for the future of zero-emission shipping with a design that would become the first ship to use a Thorium Molten Salt Reactor as its power source and would act as a replenishment vessel for expedition cruise ships. The concept of the MSR is drawing interest for multiple potential applications on land and sea as it is viewed as a safe technology that reduces the dangers of traditional nuclear reactors providing the potential for vast amounts of clean, safe electric power.

The concept vessel, Ulstein Thor is a 488-foot ship that would be powered by the MSR reactor and server as a “replenishment, research, and rescue” vessel (3R) to support the operation of Ulstein designed expedition cruise ships.

Ulstein says that the vessel concept is capable of making the vision of zero-emission cruise operations a reality. They believe that Thor, “may be the missing piece of the zero emissions puzzle for a broad range of maritime and ocean industry applications.” Using the MSR reactor, Thor would never need to refuel. As such, Ulstein says the design is intended to provide a blueprint for entirely self-sufficient vessels of the future.

“We have the goals, ambition, and environmental imperative to switch to zero-emission operations, but, until now, we haven’t had the solution,” said Ulstein CEO Cathrine Kristiseter Marti unveiling the design concept at this week’s Seatrade Cruise conference. “We believe Thor might be the answer we’ve been looking for. Thor is essentially a floating, multi-purpose ‘power station’ that will enable a new battery revolution.”

The MSR concept works by dissolving Thorium, an abundant, naturally occurring metal with low radioactivity, in liquid salt. The ensuing chain reaction heats the salt, producing steam to drive a turbine and create electricity. In the advent of a failure in the reactor, the concept is that the Thorium would become encased in the cooled salt preventing the spread of radiation.

Several concepts have been presented to leverage the capabilities of MSR in the maritime world. South Korean shipbuilder Samsung Heavy Industries said it would undertake a joint research and development project with the Korea Atomic Energy Research Institute for modern nuclear-powered ships. Recently, Samsung and Seaborg also detailed a concept to create floating power barges using MSR to create electricity.

Ulstein developed Thor’s charging capacity scaled to simultaneously satisfy the power needs of four expedition cruise ships. They said the design would enable replenishment of energy and supplies on site, while also boasting the technology to facilitate rescue operations, as well as conducting research tasks.

Closeup of Thor with its autonomous recharging vehicle (Ulstein)