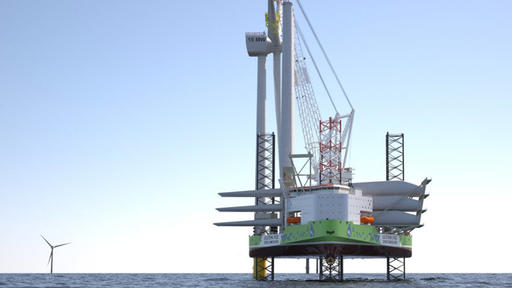 According to Ulstein, the jack-up can operate 75 per cent of the time in zero-emission mode. Using readily available technology, the additional cost is limited to less than five per cent of the total CAPEX, the company said.

Most new jack-up designs are featuring a battery hybrid system in addition to diesel gen sets, with a future option for a hydrogen-powered fuel cell system.

A high-power battery energy storage system (BESS), however, comes with downsides such as heavy weight and high cost. That is not beneficial for a WTIV design, where weight savings are essential for minimizing elevated weight and optimising the variable deck load, Ulstein said.

”We have carefully analysed the operational cycle of WTIVs and looked at the power demand in the various modes of operations,” said Ko Stroo, Product Manager at Ulstein.

”This analysis showed that ca. 75% of its time, a WTIV is in jacked-up position performing crane operations. Using a combination of a hydrogen fuel cell system and a relatively small battery energy storage system (BESS) is then sufficient to meet the overall power demand on board and crane peak loads.”

The hydrogen hybrid system of the ULSTEIN J102 design has been developed in such a way, that future developments in hydrogen technology can easily be fitted into the vessel without major modifications, Ulstein said.

”The limited availability of hydrogen bunker infrastructure in ports is often seen as a major hurdle. With our modular storage lay-out, we want to break the chicken and egg dilemma,” said Stroo.

”It creates flexibility to operate the vessel worldwide, even when bunker infrastructure is not yet present.”