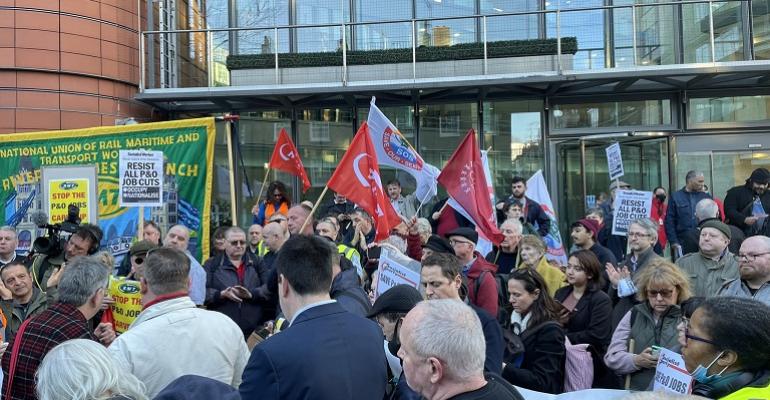 “We are closing a loophole that allowed seafarers who work on vessels that regularly serve UK ports, to be paid below an equivalent to the UK National Minimum Wage for the simple fact that the vessel operates an international service,” the UK department for Transport (DfT) said.

The legislation is the result of consultation on the Seafarers’ Wages Bill, launched in May 2022 in response to P&O Ferries’ decision to fire 800 seafarers without warning or union consultation.

The Seafarers’ Wage Bill was introduced in the House of Lords on July 7 and grants port authorities the right to deny access to UK ports to any ship regularly calling UK ports and failing to pay seafarers UK national minimum wage for time spent in UK waters.

The rules will apply to vessels and services calling UK ports at least every 72 hours or more than 120 times per year, with compliance falling to the Maritime and Coastguard Agency (MCA) and DfT.

DfT said the bill closes a loophole used by P&O Ferries and will affect thousands of seafarers.

UK Maritime Minister Robert Courts, said: “Fair pay for seafarers is a must, and the new laws we’ve introduced in Parliament today send a clear signal to operators that the UK will not let seafarers be priced out of their jobs by rogue bosses.”

Labour Markets Minister Paul Scully, said: “Just because someone works out at sea, it doesn’t mean they should be excluded from the protections UK workers receive. That’s why we’ve moved at pace to get this Bill across the line, levelling the playing field and ensuring everyone working in UK territorial waters will benefit from the equivalence of the National Minimum Wage.”

The government said it continued to work bilaterally with its European neighbours to strengthen protections for seafarers, a further initiative launched in the wake of the P&O Ferries scandal.