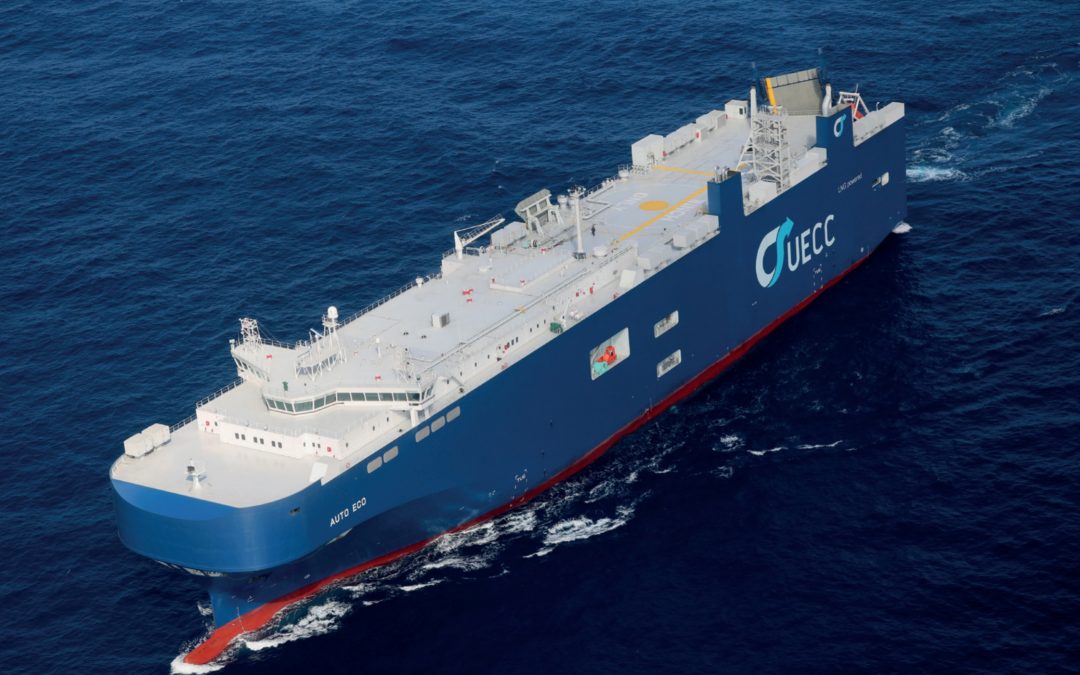 The milestone was marked on Monday, April 12. The newbuild was set to be moved from shore to the floating dock and then taken to the dredged area for docking out.

UECC said that the vessel would be fully afloat later this week.

The ship was ordered back in 2019 from China Ship Building Trading and Jiangnan Shipyard Group. The shipyard is building three hybrid LNG PCTCs for the company, with the final newbuild set for delivery in 2023.
The vessels will have a length overall of 169 meters, a width of 28 meters and a car carrying capacity of 3,600 units on 10 cargo decks, of which 2 decks are hoistable.

Battery power on the new vessels is expected to improve operational efficiency and further reduce emissions through peak shaving.

The three vessels will also meet the IMO Tier 3 NOx emissions limitations entering into force in the Baltic and North Sea from 2021.

UECC said that welcoming these vessels into the fleet will place the company beyond IMO’s target for a 40 percent reduction in carbon intensity by 2030.

Once delivered, UECC will have five dual-fuel LNG-powered ships in its fleet.

CEO of UECC, Glenn Edvardsen, believes the industry needs to act now and look at the best available solutions instead of waiting for the optimal solution.

Speaking recently on the company’s decarbonization pathway, he said the company was aware that ‘LNG would not be the ultimate future fuel, but it is the best available option now.‘

The same pragmatic thinking applies to the batteries on their new ships.

“They will not be for pure propulsion, but they will allow us to take the next step, to squeeze even more transport out of the fuel we burn and reduce emissions even further,” he pointed out.