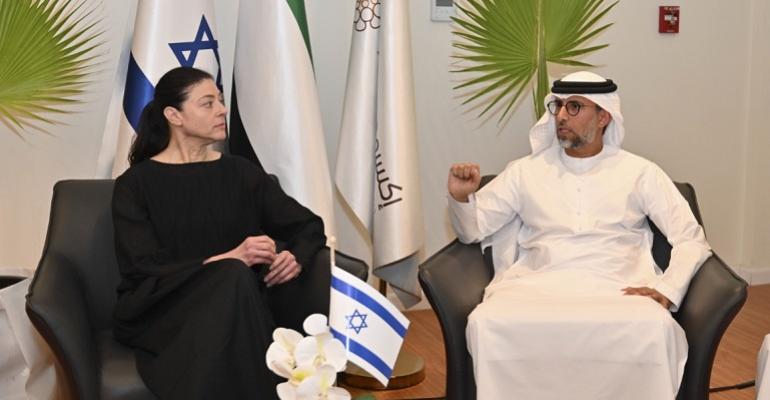 The UAE and Israel have signed an MOU to boost transport cooperation, especially in the field of maritime trade, in a boost to the strategic partnership that has emerged from the signing of the Abraham Accords, between the two countries, as well as Bahrain and the US, in September 2020.

“The joint action between the UAE and Israeli sides is part of the framework of the two countries’ interest in ensuring permanent economic security, stability and prosperity, and to develop and strengthen sustainable national economies,” Suhail Al Mazrouei, the UAE Minister of Energy and Infrastructure was quoted as saying by official UAE news agency, WAM.

“Both parties believe that boosting bilateral relations would help establish stability and peace in the Middle East, stimulate economic growth, enhance technological innovation and establish closer relations between the peoples of the region.”

As soon as the accords were signed, Israeli shipping line ZIM lost no time in initiating services to DP World’s flagship port, Jebel Ali. ZIM’s India-East Med Express offered services from Israel and the East Med to the UAE while the ZIM Israel India Service began accepting cargo from Jebel Ali to Haifa.

“Economic and commercial ties build and maintain political relations, and the MoU we signed aims at strengthening maritime transport links between Israel and the UAE, and will allow trade to flow efficiently, quickly and at a low cost,” said Merav Michaeli, Israeli Minister of Transport and Road Safety.

“I am proud that the relations between our two countries take another advanced step, allowing us to cooperate more closely and in a way that serves the interests of both sides and strengthens national economies.”

As early as 2019, before the accords even took place, DP World announced that its Yarımca Container Terminal in Turkey had added ZIM to the shipping lines it served. In September 2020, DP World’s Group

Chairman and CEO, Sultan bin Sulayem, signed a number of MOUs with DoverTower, a company owned by Shlomi Fogel, the co-owner of Israel Shipyards and Port of Eilat.