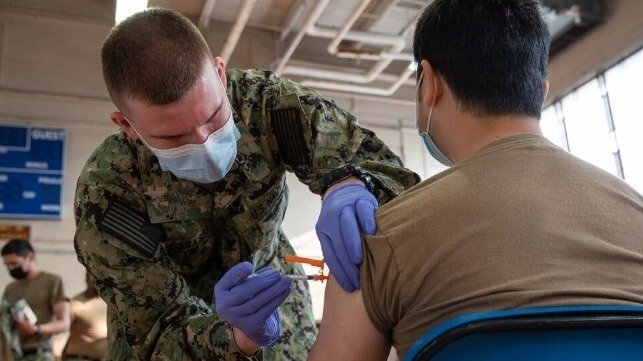 The U.S. Navy is moving full steam ahead on its plans to separate service members who refuse to accept the COVID-19 vaccine.

“In order to ensure a fully vaccinated force, U.S. Navy policy is, first, that all Navy service members receive the vaccine as directed and, second, that any who refuse the vaccine be processed for separation at the earliest possible opportunity,” said Vice Adm. John B. Nowell, Jr., the chief of naval personnel, in a message to the fleet.

Though the deadline for getting the vaccine has passed, Nowell left the door open for refusers to change their minds. If they should decide to start a course of vaccination during the separation process, the Navy’s COVID Consolidated Disposition Authority (CCDA) will generally pause or halt the proceedings.

“While the vast majority of Navy service members have already received the vaccine, it remains in the interest of the Navy to encourage remaining Navy service members to become fully vaccinated as soon as possible and, at such time, consider them for retention,” he said.

Those who continue to refuse the vaccine can expect to see their separation proceedings accelerated in order to “maximize speed and equity in achieving a fully vaccinated force,” Nowell said.

The disposition of refusers’ cases will vary by how long they have been in the Navy and their status. Sailors who are already on track to end their first six years of service by June 1, 2022, will not be processed for separation and will end their Navy careers at that point. Those in the middle of their first six years can expect an honorable discharge without further hearings; at the other end of the spectrum, those who are planning for retirement or separation by June 1 can request to have their departure accelerated. In exchange, they will generally be granted an honorable discharge.

Graduates of the U.S. Naval Academy and the NROTC program who have not completed their service requirements will be required to repay their educational expenses if they are separated for vaccine refusal.

The U.S. Navy has shown a strong commitment to adding the COVID-19 vaccine to its long list of servicemember vaccination requirements. The sailors deployed on its ships and submarines live together in cramped conditions for weeks or months, and a COVID outbreak onboard disrupts operations, with implications for national defense. However, the top leadership has also signaled that it would like to retain the small number of personnel who have so far turned down vaccination.

“Let me be clear up front: We want every sailor to receive the vaccine and stay Navy,” said Rear Adm. James Waters III, director of military personnel, plans, and policy, at a press conference on Tuesday. “If a sailor gets their shot, we will honor that and make every effort to retain them.”