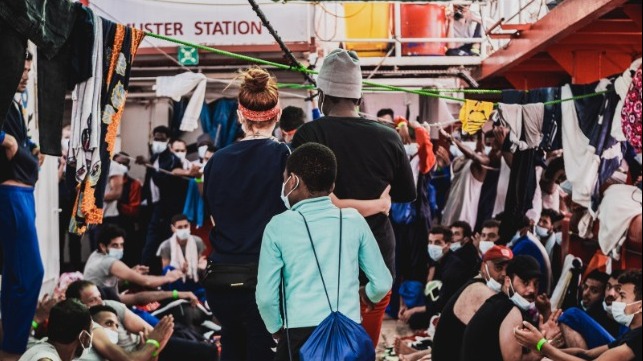 The migrant crisis in the Mediterranean continues to grow with two rescue vessels trapped at sea appealing for a port to accept the more than 800 people crammed on their decks. Italy, which has received the majority of the individuals escaping from Africa, is now appealing to other members of the European Union to assist with the rescues and receive some of the dramatically increasing numbers of refugees.

The urgent need to find a port for the vessels comes after the ocean-going tug Ocean Viking chartered to the humanitarian NGO SOS Mediterranean and a 48-year-old supply ship Sea Watch 3 operating for the NGO Sea-Watch International both returned to the Mediterranean in late July as part of their own going missions. Over the weekend of July 31, the Ocean Viking conducted six rescues from small boats taking aboard 555 people while the Sea Watch 3 conducted five rescues and currently has 257 people aboard.

Both vessels experienced medical emergencies in the past few days, requesting assistance from authorities in the region. The Italian Coastguard evacuated a pregnant woman and her companion from the Ocean Viking. Sea-Watch reports that it had two medical evacuations for a total of seven people. The German NGO reports it still has 70 minors aboard its vessel and complains that the weather conditions are growing worse, making it more difficult to care for the refugees.

“In this heat on the confined space on deck, the situation can only get worse day after day,” says Luisa Albera, search and rescue coordinator onboard Ocean Viking. The medical teams aboard both ships are reporting that many survivors were exhausted when rescued and remain fragile. Many suffer from generalized body pain, fuel burns, and seasickness. Some survivors fainted due to the heat, with Sea-Watch reporting it has to provide intravenous treatments.

“Today marks the fourth day of the Ocean Viking is waiting for a place of safety in international waters of the central Mediterranean with 553 survivors on board and no solution for their disembarkation in sight,” wrote SOS Mediterranee in a statement released today, August 5. The NGO is calling on the maritime authorities to assign a place of safety without further delay and on the EU Member States to reactivate a disembarkation and relocation mechanism supporting coastal states in coordinating disembarkations. Sea-Watch has issued a similar call for action.

The crisis has grown in 2021 with many individuals fleeing from northern Africa, often with the assistance of Libyan smugglers. Italy’s Interior Ministry estimates that the number of refugees tripled this spring. In July alone 8,600 people were landed in Italy up from 7,000 a year ago. Now there are 800 individuals on the two vessels and many more come ashore in Italy after crossing the Mediterranean in small boats and even attempting the crossing in dinghies and inflatable boats.

Italy’s Interior Ministry made an official request to the EU for “activation of a mechanism that involves the member states to allow for docking that is safe and compatible with anti-COVID-19 measures, to NGO ships flying European banners.”

In addition to the pandemic, the problem is also compounded by the fact that most of the African nations do not have repatriation treaties with the EU making it impossible for those found ineligible for asylum to be returned to their home nation. Italy and Malta have been providing a port for the search and rescue vessels, but the Italian authorities are calling for other countries to assist.