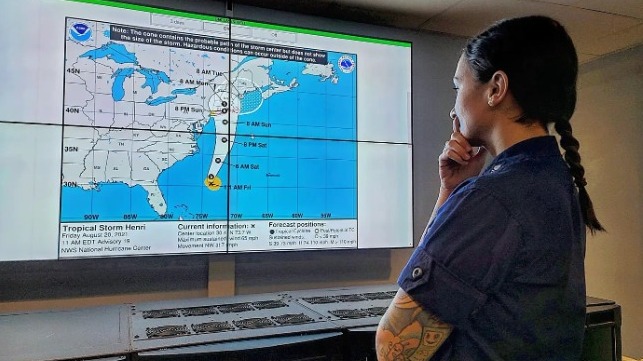 The captain of the port for the Port of New York and New Jersey, the largest port in the region, cautioned Saturday that the giant complex could close to merchant vessel traffic if the weather conditions become severe. The storm made landfall in Rhode Island on Sunday afternoon and slowed down, dumping a record-setting deluge of rain over New York City as it passed by. It quickly weakened to winds of 40 mph, just above the threshold for a tropical storm, and is expected to quickly weaken as it continues over New England.

By Sunday evening, the captain of the port for New York had reset Port Condition Yankee, advising mariners to exercise caution but allowing them to navigate at will (subject to the advice of docking pilots). The Coast Guard and industry partners quickly conducted a waterway safety assessment south of the George Washington Bridge and Hunters Point, allowing pilotage to resume in the majority of the harbor.

The captain of the port thanked the maritime community for its proactive approach to preparedness in advance of the storm.

“Experienced commercial mariners and maritime industry who we work with every day are a critical part of our hurricane and severe weather plans.  I cannot emphasize enough how much I appreciate their proactive efforts to prepare for this storm.  Their partnership, along with our New York and New Jersey first responder colleagues truly create the fabric that makes this port special,” said Capt. Marc Sennick, Alternate Captain of the Port for New York and New Jersey.

On Sunday, the Oasis of the Seas, one of the world’s biggest cruise ships, was set to head out on a test cruise from Bayonne, New Jersey. Royal Caribbean chief meteorologist James Van Fleet predicted that the storm would not be severe enough in the New York area to disrupt her schedule and that she would not experience rough seas. As of 1700 hours local time on Sunday, the Oasis of the Seas was moored in Bayonne.

Though the storm’s high winds have eased, the National Hurricane Center predicts more heavy rainfall and isolated flash flooding as it slowly moves north across Massachusetts. It is expected to turn further east and head out to sea late Monday.