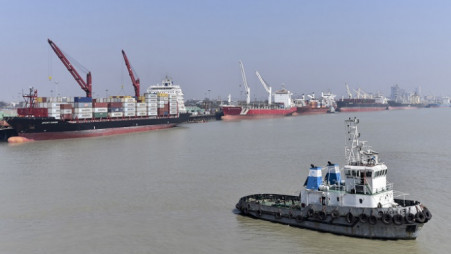 The ship left Kolkata Shyama Prasad Mukherjee Port on Sunday morning with a test consignment of transit goods under the transit agreement signed between the neighbouring countries.

After unloading the steel bar-laden containers from the ship, they will be transported to India’s Assam via the Chittagong- Sheola (Sylhet)- Sutrakandi (Assam) route.

A trailer has been hired for Tk80,000 to transport the consignment to Sheola, informed Yakub Sujan Bhuiyan, managing director of Mango Line Limited, also shipping agent of the MV Trans Samudera.

The return cargo will be loaded into containers carrying tea leaves from Meghalaya, India at Dawki land customs station. The cargo boxes will arrive at Chattogram port via Tamabil land customs station for further shipment to their final destination in Kolkata.

From the MV Trans Samudera, Chattogram Customs will earn Tk7,754 in duties for the trans-shipment and about $70 dollars for clearing the goods, according to port authorities.

The trial operation of five transit routes will conclude with the completion of the current trial and return trial. After that, India’s transshipment of cargo to northeastern states using the Chattogram and Mongla seaports will be made fully operational.

Dhaka and Delhi signed a memorandum of understanding in 2015 on the use of the Chattogram and Mongla ports, following years of persuasion by India.

The two sides signed an agreement in 2018 and a standard operating procedure (SoP).

According to the SoP, goods reaching Chattogram and Mongla sea ports would be carried by four road, rail, and water routes to Agartala (Tripura) via Akhaura; Dawki (Meghalaya) via Tamabil; Sutarkandi (Assam) via Sheola; and Srimantpur (Tripura) via Bibirbazar.