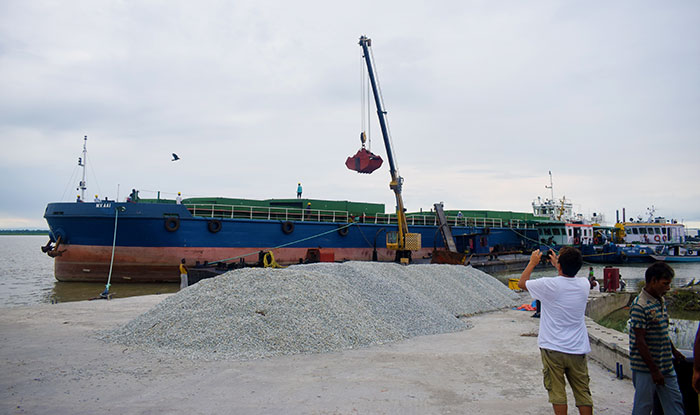 The first trial container ship from Kolkata to Agartala and Karimganj through Chattogram port has not only opened up big opportunities for Indo-Bangladesh trade but also Bangladesh-Bhutan-India-Nepal (BBIN) sub-regional cooperation, according to an  analysis.
Titled as ‘Transit via Bangladesh ports for NE India to give impetus to BBIN construct’ the analytical report argued that NE India’s access to seaports in Bangladesh is expected to give momentum to BBIN which is a ‘path breaking concept in sub-regionalism’.
“The restoration of the access of the India’s northeast to seaports can influence Bhutan to ratify the BBIN Motor Vehicles Agreement (MVA) that aims at enhanced regional connectivity through facilitation of regional cross-border road,” said an analytical report.
The report also pointed out that the access to Chittagong and Mongla seaports in Bangladesh are critical to opening shorter and alternative routes to connect the Northeast (NE) region with the mainland India.
“It drastically cuts short the distance between Kolkata and Agartala via Assam from about 1600km to just about 450 km,” it added.
It is to be noted that the first consignment of Indian goods under the trial run of the transhipment deal arrived in Chattogram port on July 21.
The ship, MV Shejyoti carrying four TEUs (20-foot equivalent unit) transhipment goods from India’s Haldia port, anchored at the New Mooring Container Terminal-1 in Chittagong.
The containers laden with 53 tonnes of rods and 49 tonnes of pulse were later shipped to Agartala through Akhaura Land Port in Brahmanbaria. A team of customs official escorted the consignment from the port to the border. Customs house received Tk28,907 for seven types of fees to facilitate the transhipment.
To make the transit or transhipment a success, the Standard Operating Procedure (SOP) for use of Chittagong and Mongla ports for movement of goods to and from India were signed in 2019.
“This model can feed into BBIN and subsequently into Indo-Pacific construct,” argued this analysis.
Following the signing of the second addendum to the protocol at Dhaka on May 20 this year, the both the countries now have 11 ports of call and two extended ports of call.
“New ports of call include Jogighopa in Assam which will provide connectivity to Meghalaya and Bhutan as well,” it added.
Source:- Daily Shipping Times