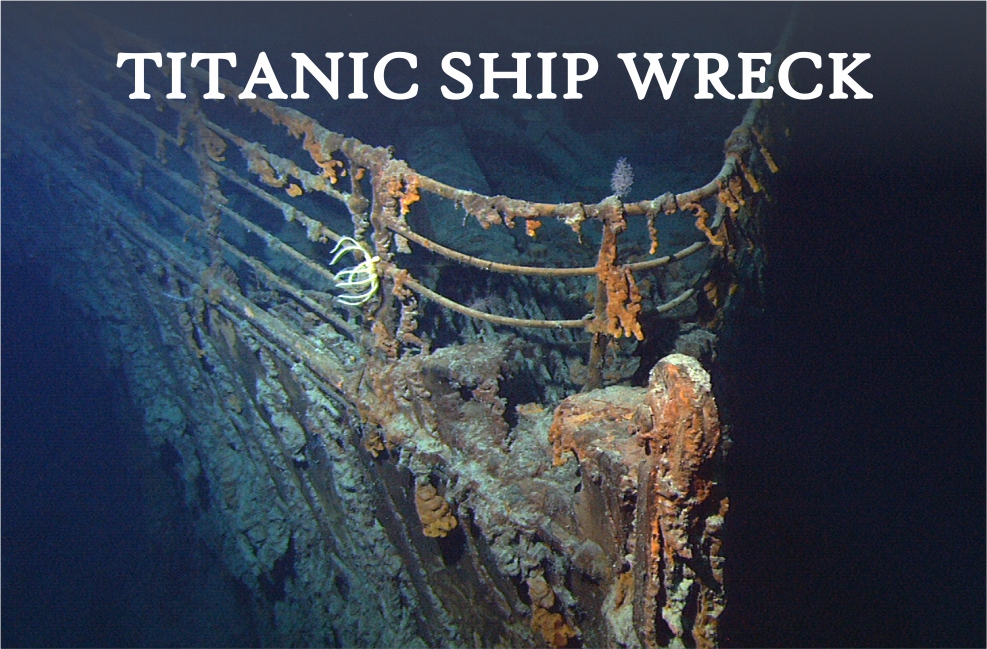 Who doesn’t know the story of ‘Titanic’? Titanic grabbed the attention public by the James Cameron movie “Titanic”. RMS Titanic was a British passenger liner owned and operated by the White Star Line that sank in the North Atlantic Ocean on April 15, 1912, after colliding with an iceberg while on her maiden journey from Southampton, England, to New York City. More than 1,500 people perished out of the estimated 2,224 passengers and crew on board, making the disaster one of the worst incidents for a single ship at the time. It is still the deadliest sinking of a superliner or cruise ship in peacetime. The accident generated a lot of media attention, gave a lot of material for disaster movies, and inspired a lot of artistic works.

The RMS Titanic was the second of three Olympic-class ocean liners operated by the White Star Line and was the biggest ship afloat at the time she started sailing. The Belfast-based Harland & Wolff shipyard constructed her. The accident claimed the life of Thomas Andrews, the shipyard’s senior naval architect at the time.

Captain Edward Smith, who drowned with the ship, was in charge of the Titanic. Hundreds of emigrants from Great Britain and Ireland, Scandinavia, and other parts of Europe, as well as some of the world’s wealthiest individuals, boarded the ocean liner in search of a new life in the United States and Canada.

With a gymnasium, swimming pool, library, high-class restaurants, and lavish cabins, the first-class accommodations were meant to be the height of comfort and elegance. The ship had a high-powered radiotelegraph transmitter for sending passengers “marconigrams” and for operational purposes. Watertight compartments and remotely actuated watertight doors were among the Titanic’s innovative safety measures.

The Titanic had only 20 lifeboats, four of which were fragile and difficult to launch while the ship was sinking; the ship had 16 lifeboat davits, each capable of dropping three lifeboats for a total of 48 boats. The 20 lifeboats could contain a total of 1,178 people, which was less than half of the passengers on board and less than one-third of the passengers the ship could have transported at full capacity (this was consistent with the maritime safety regulations of the era). Furthermore, many of the lifeboats that had been lowered were only around half full when the ship sank.

The ship sank 12,600 feet to the seabed in two pieces and can still be found 370 miles off the coast of Newfoundland at a depth of 2,100 fathoms. Some of the ship’s bunkers, passengers’ baggage, wine bottles, and even the entire face of a child’s porcelain doll are among the debris fields that surround each area of the wreck.

The Titanic was long assumed to have sunk intact, and several proposals to raise the wreckage were proposed throughout the years. None of the plans came to fruition. The main issue was the sheer difficulties of locating and accessing a disaster that was more than 12,000 feet (3,700 meters) below the surface and with underwater pressure of more than 6,500 pounds per square inch (450 bar). Several expeditions were launched in search of the Titanic, but it wasn’t until September 1, 1985, when a Franco-American mission commanded by Jean-Louis Michel and Robert Ballard proved successful.

Titanic has torn apart, most likely close to or at the surface, before sinking to the bottom, according to the study. In Titanic Canyon off the coast of Newfoundland, the divided bow and stern parts are roughly a third of a mile (0.6 km) apart. They’re around 715 miles (1,151 kilometers) from Halifax and 1,250 miles (2,012 kilometers) from New York, and they’re 13.2 miles (21.2 kilometers) from the Titanic’s radio operators’ incorrect location on the night of the ship’s disaster.

Both pieces collided with the seabed at high speeds, causing the bow to crumple and the stern to completely collapse. The bow is by far the most well-preserved part, with some remarkably well-preserved interiors. The stern, on the other hand, is entirely destroyed; its decks have collapsed on top of one another, and most of the hull armor has been torn off and is strewn across the seabed. The stern’s substantially higher amount of damage is most likely attributable to structural damage sustained during the sinking. As a result of the weaker stern, the contact with the seabed flattened the rest of the stern.

A debris field extending roughly 5 by 3 miles (8.0 km 4.8 km) surrounds the two parts. Hundreds of thousands of objects, including ship parts, furniture, crockery, and personal effects, fell from the ship as it sank or were ejected as the bow and stern collided with the sea surface. A number of Titanic passengers and crew members were also buried in the debris area. The majority of the bodies and clothing were destroyed by marine critters and germs, leaving just a pair of inedible shoes and boots as evidence that bodies previously lay there.

Since its initial discovery, the wreck of the Titanic has been revisited on numerous occasions by explorers, scientists, filmmakers, tourists, and salvagers, who have recovered thousands of items from the debris field for conservation and public display. The ship’s condition has deteriorated significantly over the years, particularly from accidental damage by submersibles but mostly because of an accelerating rate of growth of iron-eating bacteria on the hull. In 2006, it was estimated that within 50 years the hull and structure of the Titanic would eventually collapse entirely, leaving only the more durable interior fittings of the ship intermingled with a pile of rust on the seafloor.

RMS Titanic Inc. has discovered several relics from the Titanic’s wreckage and displays them in traveling exhibitions throughout the world as well as a permanent exhibit at the Luxor Las Vegas hotel and casino in Las Vegas, Nevada. Several additional museums display artefacts provided by survivors or recovered from the floating bodies of tragic victims.

Photos of probable human remain laying on the ocean floor were revealed on April 16, 2012, the day after the sinking’s 100th anniversary. The photographs, obtained by Robert Ballard during an NOAA-led expedition in 2004, reveal a boot and a coat near the Titanic’s stern, which experts described as “compelling proof” that it is the site where someone came to rest, and that human remains may be buried underneath them. The Titanic is covered under the UNESCO Convention on the Protection of Underwater Cultural Heritage, which was signed in 2001. This means that plundering, commercial exploitation, sale, and dispersal of the wreck and its artefacts will be prohibited in any states that have signed the agreement.

Due to the wreck’s location in international waters and the lack of any exclusive jurisdiction over the wreckage area, the convention establishes a state-to-state cooperation system in which states share information about potential activities involving ancient shipwreck sites, such as the Titanic, and work together to prevent unscientific or unethical interventions. In 2019, submersible dives discovered more degradation of the wreck, including the disappearance of the captain’s bathtub. A two-person submersible vehicle that was doing research and recording a documentary fell into the wreckage between July 29 and August 4, 2019. The sub-dives were carried out by EYOS Expeditions. Strong currents forced the submarine into the wreck, leaving a “red rust smear on the side of the submarine,” according to the report. The Titanic was not damaged, according to the assessment.