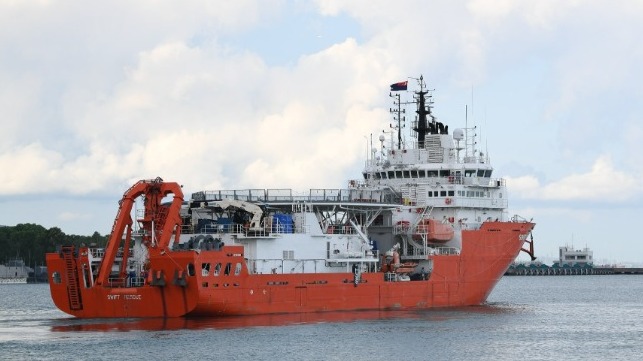 The Indian, Singaporean and Malaysian navies have all joined in the effort to find the lost Indonesian sub KRI Nangalla. 53 servicemembers were on board when the sub disappeared during a training dive on Wednesday, and if the hull remains intact, any survivors may only have enough fresh air to last until the weekend.

“Under a blackout condition, KRI Nanggala can last for 72 hours with the existing oxygen capacity, which is estimated until Saturday,” said Indonesian Navy chief of staff Laksamana Yudo Margono at a press conference Thursday.

Singapore’s submarine support and rescue vessel MV Swift Rescue is under way to support the response, and she is on track to arrive in the Java Strait on Saturday. She carries a deep search and rescue submersible and an ROV.

“[MV Swift Rescue] was dispatched expeditiously yesterday afternoon, as fast as she could get ready . . . A medical team was also added to the regular crew in the event that hyperbaric care would be needed,” said Singapore defense minister Ng Eng Hen in a statement. “Our fervent prayers and hopes go out to the crew of KRI Nanggala, for their safety and resilience and also to the search and locate teams of the Indonesian Navy currently on site.”

The Malaysian submarine rescue vessel Mega Bakti – a veteran of the search for the missing aircraft MH370 – is also under way, and she is expected to arrive on the scene on Sunday. She is equipped with an ROV, an emergency resupply pod and an emergency ventilation system.

The Indian Navy has also dispatched a submarine rescue team aboard the OSV SCI Sabarmati, and the vessel is under way in the Bay of Bengal. Given the distance, she is not expected to arrive until the end of next week.

The KRI Nanggala lost contact after receiving permission to dive for a torpedo-launch training exercise, and the cause of the casualty is not yet known.

“It is possible that during static diving, a blackout occurred so control was lost and emergency procedures cannot be carried out and the ship fell to a depth of 600 meters to 700 meters,” the Indonesian Navy said in a statement on Wednesday.

The water depth in the area is well in excess of the sub’s maximum depth rating. An oil spill was spotted on the surface near the Nanggala’s last known position, but the vessel herself has not yet been located. Five Indonesian Navy vessels are engaged in the search, assisted by one helicopter.