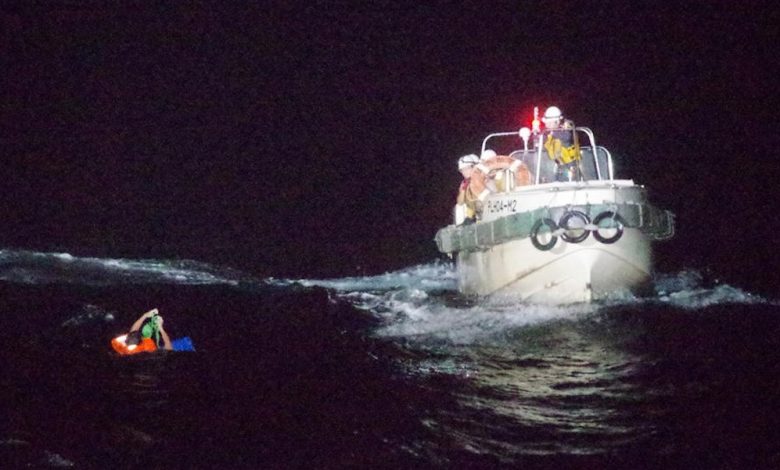 Thousands of people around the world are joining together to get more nations involved in the search operation for the missing 40 crew from the Gulf Livestock 1, which sank in the East China Sea off southern Japan 13 days ago.

The Japan Coast Guard is still engaged in the search with both boats and aircraft, while huge efforts are being made via an online community to keep up the quest to find crew members from the Gulf Navigation livestock carrier.

Just three men from the 43 crew – a mix of Filipinos, Australians and New Zealanders – have been found so far, but families of the missing crew are pinning their hopes to the fact that three liferafts and one lifeboat remain missing.

More than 100,000 people have signed petitions urging Australasian governments to get involved with a renewed search, while geographers and scientists have created a map (see below), issued yesterday, suggesting where the life rafts might be now taking into account the wind, swell, drift and current off southern Japan, an area battered by typhoons in recent weeks. The hundreds of vessels transiting the busy shipping area are asked to be on the lookout for the missing liferafts.

On various social media platforms the Save The Forty campaign is gathering momentum while an urgent letter has been sent to the United Nations seeking a swift international charter to be declared in order to access post-event high resolution satellite imagery to conduct the world’s largest volunteer search and rescue mission.

“We need the help of thousands of digital public searchers to review the imagery for signs of the missing shipmates and their international orange lifeboats they set to sea in,” the letter states.

On Facebook, the Save The Forty group, created by the International Rescue Instructors Association (IRIA), is gaining a quick following as it seeks to create the world’s largest maritime search and rescue crowdsourcing team.

Efforts to track the missing rafts from satellites or the air have been hampered in recent days by significant cloud cover in the area. Splash understands that Japanese search teams have been focused on the seas south of Osaka today.

“The families of the Gulf Livestock 1 are the heroes of this tragedy. We are witnessing an incredible group of family members who have become a force of nature themselves. Their spirit, love and fortitude are inspiring,” Shawn Alladio, the president of IRIA, told Splash today.

The Gulf Livestock 1 started its trading career as a 630 teu containership in 2002 before being converted to carry animals 10 years later. The sunken ship had a chequered past. European shipping database Equasis lists 25 port state control deficiencies in 2019 and 2020 alone, including a number relating to the main engine. In July last year the ship drifted for a day undergoing repairs following an engine failure. It met its fate on September 2 when it travelled into the middle of a typhoon while en route from New Zealand to China. The Panama-flagged vessel lost power, took on water, capsized and sank.