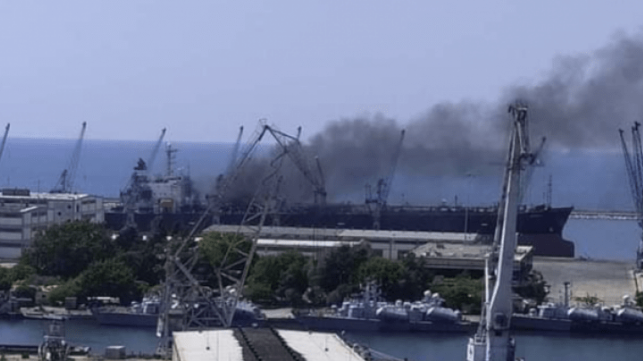 For the third time in months, Syrian media is reporting a fire and possible explosion aboard a Panama-flagged tanker docked in the port of Lattakia. The somewhat mysterious tanker has at times been linked to the Iranian oil trade and in the spring some reports suggested it was attacked possibly by drones or missiles while anchored off Syria.

Images of smoke rising from a tanker in Syria’s principal port quickly began to appear on social media earlier today. However, the Syrian state media outlet SARA issued reports quoting Lattakia port officials and the Lattakia Fire Brigade saying it was a maintenance accident and that the fire has been extinguished. Six units of the local fire brigade responded to the port and two workers aboard the tanker were transferred to a local hospital reporting a breathing problem.

With tensions remaining high across the Middle East after the recent drone attack on the Mercer Street and attempted hijacking of the Asphalt Princess, Iranian media was quick to report on today’s fire. In the past, Iran has accused Israel of attacking its vessels bound for Syria and in the spring The Wall Street Journal and Israeli news outlet Maariv both issued reports saying that Israel was staging clandestine attacks against vessels heading to Syria.

The SANA news agency is carrying reports from hardliners loyal to Syrian President Bashar al-Assad that cited Russia behind the attacks on the tanker. They are accusing Russia of trying to interfere with the Iranian oil trade to Syria.

The vessel is a 22-year-old oil tanker by the name of Wisdom. The 45,900 DWT tanker, registered in Panama, is reportedly owned by a company in Lebanon. TankerTrackers says that the vessel has been in Syria for months, but in the past was used in the transfer of Iranian oil offloaded on this tanker for Syria.

In April, reports and pictures circulated of the vessel offshore with smoke rising after what was suggested to have been an attack. Syrian and Iranian media, however, said the fire had been caused by a welding accident. One worker aboard the ship reportedly died. A few weeks later in early May, more images emerged showing smoke rising from both the front and rear of the vessel, but Syrian media later said it was an engine malfunction.

Today’s reports sought to emphasize that it was a small fire and quickly brought under control by the fire brigade.