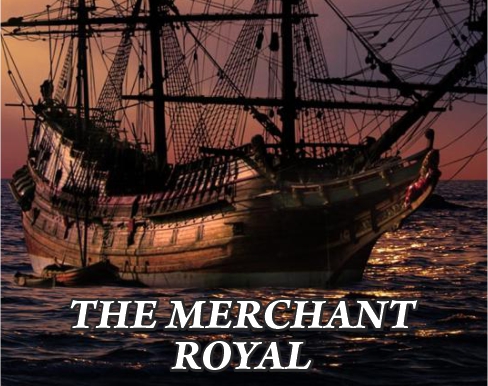 As Michel Serres famously puts it, “Voyaging begins when one burns one’s boats, adventures begin with a Shipwreck” and through the series of discovering the deepest shipwrecks we began with the most famous “Flor de la mar”. Voyaging in the series today we halt at the El Dorado of the Seas none other than,

The Merchant Royal, famously known as “The Ship of Gold”, began its shipwreck adventures when the vessel lost herself at sea due to rough winds in Cornwall in 1641. The Merchant Royal was built in Deptford, London in 1627. She weighed 700 tonnes with her length of around 157 ft. She was owned by the English merchants and was set to sail on her voyage from the Spanish colony of San Domingo, captained by John Limbrey.

At the time of war between England and Spain during the 16th and 17th centuries, “The Merchant Royal,” taking advantage of the time, set sail under the command of Limbrey, building trade among the Spanish Colonies brimming with riches from successful trading missions. It was during this time that she arrived in southern Spain carrying precious metals of gold and silver worth more than 1 billion British pounds in today’s currency, armed with 32 bronze canons that were profitably gained between Limbrey and the Spanish Colonies. In all these adventures, “The Merchant Royal” had been going through leakage repairs that helped cure for the moment but failed to work in the long run of her lifespan.

In 1641, on her next stormy voyage, trailed alongside her sister ship ‘The Dover Merchant’, headed towards Flanders, her galleon got into major difficulties, filling up the ship with more and more water that forced her to stop at the west coast of Cornwall. Due to unfavorable weather conditions, the rescuers were unable to reach her at the time. In all, 18 crew members were drowned, but in good luck, 40 crew were saved along with Captain Limbrey by the Drover Merchant. However, the situation was not in favour of the Merchant Royal, which led to her sinking due to bad weather near the Isles of Scilly in 1641.

The news about the Merchant Royal spread like wildfire. Till date, there has been no news about The Merchant Royal, but sources uncovered a part of the wreckage and reclaimed from the waters the ship’s anchor in 2019. The ship has never been found and is yet missing! Within the oceans depth lies within her soggy hull the valuable treasures of history!