Tanker Saves Two People Clinging to Board in the Ocean 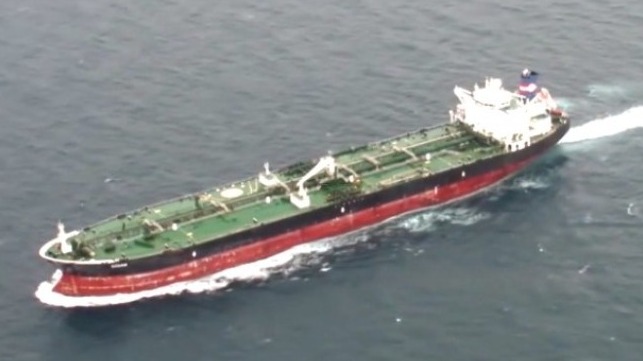 In a stroke of good luck, a Marshall Island flagged crude oil tanker, the 113,553 DWT Godam, happened upon two people floating in the Torres Strait separating northern Australia and Papua New Guinea this morning. A costal pilot aboard to assist with the navigation of the tanker, sighted the two individuals clinging to a timber of wood in the ocean.

At the time of the sighting the vessel, which was sailing at approximately 13 knots, reported that the two individuals were approximately six miles southeast of Sue Islet, Warraber Reef. Sea conditions were rough with a swell of six to eleven feet and winds around 30 knots. It was just after 7 a.m. local time.

The crew of the tanker contacted the Townsville Vessel Traffic Services (VTS) to report the sighting of two people and they immediately contacted the Australian Maritime Safety Authority.  A Challenger search and rescue jet was dispatched from Cairns and a Queensland Government rescue helicopter.

Before the aircraft arrived at the location, the tanker was successful in pulling one of the two people from the water.

While the tanker crew had been able to maintain visual contact with both individuals, they had not succeeded in rescuing the second person. The second person was retrieved from the water by the rescue helicopter.

After their rescue the two individuals reported that they had been in the water for approximately 16 hours since their boat had sunk around 4 p.m. the prior afternoon.

Both survivors were then transferred by the rescue helicopter to medical facilities on shore.

AMSA reports that the cause of the boat sinking is unclear. They thanked everyone involved in the miraculous rescue saying that it upholds the spirit of the great maritime tradition of coming to the aid of those in need.