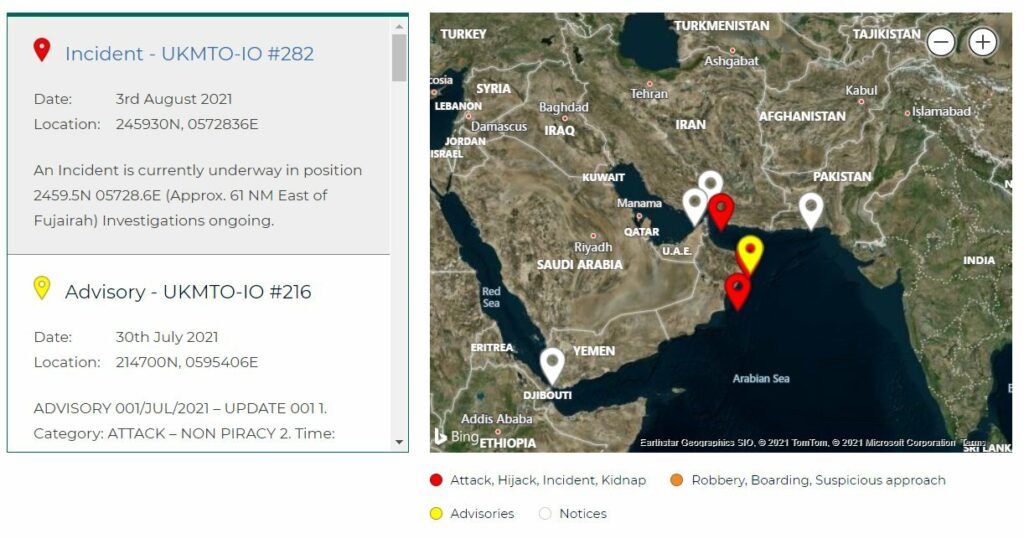 The United Kingdom Maritime Trade Operations (UKMTO) has issued a warning on 3 August 2021 that a ship may have been hijacked off the coast of the United Arab Emirates (UAE).

UKMTO initially reported a “non-piracy” incident on the unidentified ship before updating its description to a “potential hijack” which occurred off the UAE coast, approximately 60 nautical miles from Fujairah.

Maritime security analysts at Dryad Global have identified the ship as the bitumen tanker Asphalt Princess.

The 9,700 dwt tanker is 134 meters long and currently sailing under the Panama flag. The ship’s owner is Dubai-based shipping company Prime Tankers.

The vessel started its voyage at the Port of Khor al Fakkan in the UAE and it was traveling to Sohar, a port on Oman’s northern coast when the incident occurred.

According to several media sources, the British government is working on the assumption that the tanker has been boarded by Iranian group of eight or nine armed individuals.

The White House described news about the Asphalt Princess as “deeply concerning”.

Citing Refinitiv ship tracking data, that at least five ships in the sea between the UAE and Iran updated their AIS tracking status to “Not Under Command” on the same day.

A US Air Force aircraft was seen flying over the sea, according to data from FlightRadar24.

As of writing, the government of Oman hasn’t issued any statements related to the incident.