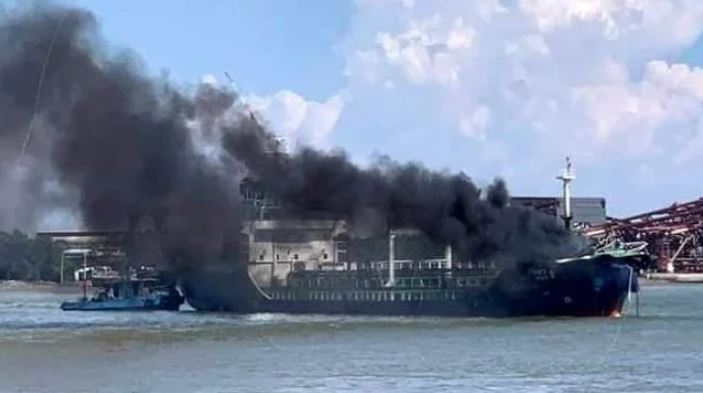 Thai officials are investing why an oil tanker carrying 3.2 million liters of crude oil suddenly burst into flames killing one and injuring a second crewmember. It was the second tanker fire in less than a month, prompting the Marine Department to say that a thorough investigation is required of the industry.

The 3,500 dwt tanker named Ampar 8 was traveling along the Chao Phraya river toward Bangkok where it was to offload the crude to a refinery. Shortly after mid-day on March 27, the vessel was rocked by an explosion in its bow followed by a billowing fire. Some reports indicated that it was preparing to dock but drifted downriver before anchoring.

The Royal Thai Navy and local rescue service dispatched tugs to fight the fire and took 12 crewmembers from the stern of the vessel. Two crew members were unaccounted for and they later found that the deputy captain was badly burned and jumped overboard with the crew recovering his body from the river. A second crewmember was found injured aboard the vessel and taken to a hospital.

Fire crews remained at the scene of the accident putting additional water on the bow of the vessel to cool it and prevent additional explosions or the fire from reigniting. They reported that there was no leak of oil but the Marine Department ordered the vessel’s charterer, Grace Ocean Marine Company, to develop a play to remove the oil from the vessel. At the same time, inspection crews were aboard looking for the source of the fire.

On March 3, a second tanker in Thailand also suffered an explosion and fire. While the vessel was docked at the time, four crewmembers were forced to jump overboard with three making it to shore. The body of the fourth was later recovered with officials reporting he had drowned in the river. That tanker, the Smooth Sea II was empty at the time and the investigators were looking to see if vapor caused the explosion.