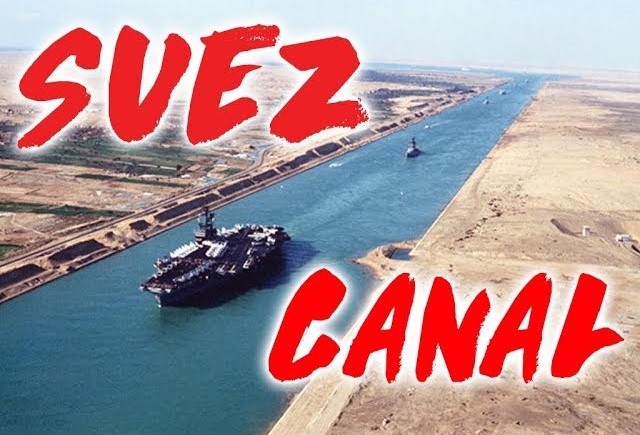 “Ever Given, a large container ship got stuck in the crucial Suez Canal on March 23, leading to a massive traffic jam.” This news has been making rounds on the internet for weeks now, thereby popularising the canal. You must already know that this popular canal is located in Egypt. Now, we are determined to tell you a bit more about its history and features in this part of ‘The Series of Canal’.

Earlier, the ships trying to cross between Europe and Asia would have to embark on an exhausting journey around the Cape of Good Hope at the southern tip in Africa. People wanted an easier route for quick transportation and believed that the Egyptian rulers could connect the Red Sea with the Mediterranean Sea using a system of small canals, however, the desert sands buried them. It was not until the mid-19th century that mankind readdressed the problem. Suez Canal, the human-made sea-level waterway was built between 1859 and 1869 and officially opened on November 17, 1869. It cuts north-south across the Isthmus of Suez in Egypt to link the Mediterranean Sea and the Red Sea. The canal separates the African continent from Asia, creating the shortest maritime route between the Atlantic Ocean and lands around the Indian and western Pacific Ocean by cutting distances by up to 7,000 km. Due to its strategic location, it is the world’s most heavily used shipping lanes since its completion. Today, more than 20,000 ships transit the canal yearly.

Further, the Suez Canal was financed by the Suez Canal Company, a joint-stock company headquartered in Paris. At the time of its founding, France had 52 percent of shares and Egypt held 44 percent. By 1875, Egypt’s shares had been sold to Great Britain, which assisted in the canal’s administration.

The Suez Canal’s international status has a murky history. Per the 1888 Convention of Constantinople, the canal is open to ships of all nations in peacetime and wartime. However, there have been numerous instances of ships being denied passage in wartime, especially during World War I and World War II. Because of tensions with Israel, Egypt closed the canal during the Suez Crisis of 1956–57 and the Arab-Israeli War of 1967.

As the canal has been constantly improved depending upon the growing requirements since its construction. It has fascinatedly changed, various forms of what is today the Suez Canal existed in Egypt between 1850 BCE and 775 CE, although primarily to facilitate trade between the Nile River Delta and the Red Sea. Between 1859 and 1869, Egyptian khedivate Saʿīd Pasha partnered with France’s Suez Canal Company to build the present canal connecting the Mediterranean and Red seas

This marvel extends from Port Said in the north to Suez in the south, with dredged approach channels north of Port Said, into the Mediterranean, and south of Suez. (Dredging is the act of removing silt and other material from the bottom of bodies of water. As sand and silt wash downstream, sedimentation gradually fills channels).

From its northern terminal at Port Said, the canal passes through the salt marsh area of Lake Manzala, with the freshwater canal running parallel. About 30 miles from Port Said, a seven-mile bypass built between 1949 and 1951 enables convoys to pass. At about the halfway point, the canal enters Lake Timsah and passes Ismailia. Thence, the waterway proceeds through the Bitter Lakes and on to Port Tawfīq, the southern terminal on the Red Sea, a few miles from the town of Suez.

Being one of the world’s longest canals, it connects water bodies at differing altitudes with no locks to interrupt traffic. The canal utilizes several lakes from north to south. With the Nile River’s low-lying delta to the west of the canal and the higher, rugged, and arid Sinai Peninsula to the east, the average end-to-end transit time is about 13 to 15 hours. There are about eight major bends even though extensive straight lengths occur.

The canal remained open despite much political controversy for all the countries. Nationalized by Egypt in 1956, it was blocked in 1967 after the Arab-Israeli War and remained so until 1975. Over the years, the Suez Canal has been expanded on many occasions, from an initial length of 102 miles and a depth of 26 feet to the latest expansion, which brings its length to 120 miles and its depth to 78 feet, allowing it to accommodate the world’s largest vessels which pass side by side as they travel between the Mediterranean Sea and the Red Sea.