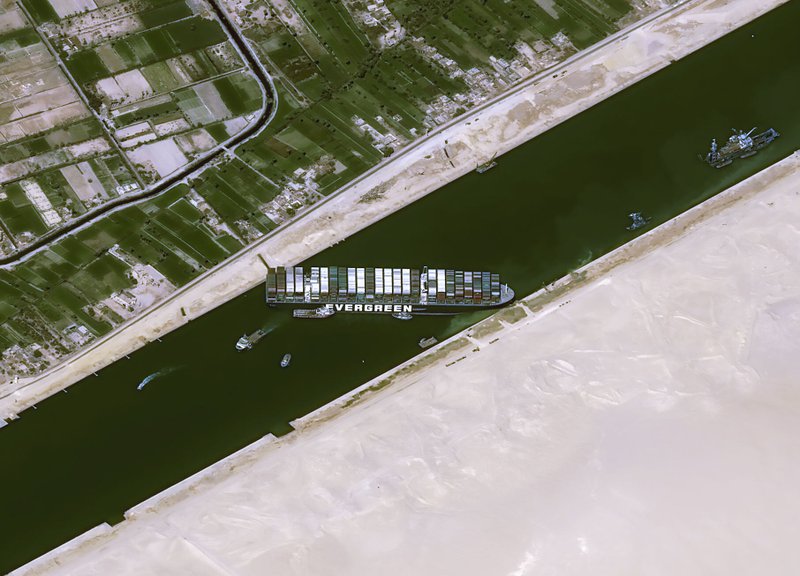 With dozens of oil and refined products tankers still waiting to pass through the Suez Canal — where an ultra large container ship is stuck — market participants cautioned March 25 that it is a logistics disruption that can hurt cross-continent arbitrage trade flows, add to freight costs and spur insurance claims.

From bulk carriers such as the Apolo to a chemical tanker, the Diva and from fuel oil laden Almi Odyssey and naphtha laden Bowfin, ships with many cargo types are waiting for their turn to pass the canal, according to data from transit services provider Leth Agencies and tanker brokers.

Analysts, traders and shipping executives, who spoke to S&P Global Platts, described it as an “arbitrage killer” if the 400-meter long Ever Given, chartered by Taiwan’s Evergreen Marine Corp., is not moved out at the earliest. The actual arbitrage exists only on paper as the canal lanes are blocked, they said.

“The accident can have a significant impact on oil and products trade flow” if the bottleneck in the canal lane lingers, said a source with a clean tankers owners, whose naphtha laden LR is waiting near the canal to move from the West to East.

Similarly, there are several other tankers with gasoil and jet fuel which are also delayed on the Persian Gulf-Europe route.

Sources near the canal claim that the ship has already refloated partially but shipping executives claim it does not mean anything unless the normal traffic resumes.

It is not just the laden ships but also several empty VLCCs which ballast across the canal to pick up their North Sea crude barrels. Even after the traffic resumes, delivery of this crude will now be delayed.

Traders tracking the development highlight the cascading effect of the accident, because now there will be crowding at the load and discharge ports resulting in significant demurrage costs and also insurance claims.

“Going via Cape of Good Hope is not an option because it will take three weeks to reach Rotterdam, as this disruption is expected to clear in a few days,” a technical superintendent, who handles such tankers, said.

Consequently, the tankers carrying gasoil and jet fuel to the West and naphtha from the Mediterranean to the East or going empty West for their next crude parcel, have no choice but to wait. Eventually, when the traffic gets cleared — which it will in a few days — they will be arriving behind schedule and create a congestion at the origin and destination ports, sources said.

Replacement of delayed ships with new ones will add to the freight costs.

Though the East to West arbitrage to move gasoline was open on paper, actual flows into April remain thin, traders said.

On the morning of March 25, the East/West arbitrage stood at around minus $3.25-$3.30/mt, lower than the previous day’s close of around minus $3/barrel.

In early March, there was a flurry of arbitrage cargoes moving West to countries such as Nigeria but not anymore, a Singapore-based trader said.

The prompt forward market curve on gasoline also showed little impact as the 92 RON gasoline April/May spread narrowed by 6 cents from the previous close to 26 cents/b March 24. At 11 am Singapore time (0300 GMT), the spread was pegged at plus 30-31 cents/b.

Diesel markets also showed little or no sign of impact in the prompt market, as the April East-to-West spread was at an intraday value of minus $3.25/mt, widening slightly from minus $3.54/mt assessed at the Asian close March 24. Arbitrage economics to move Asian gasoil barrels West are typically viable when the East to West spread widens out to a discount of between minus $10-$15/mt.

Also, the prompt April/May spread on the 10 ppm sulfur gasoil narrowed by 4 cents/b from the previous close to minus 22 cents/b March 25 at 11 am Singapore time.

The lack of a significant uptrend in the front-month/second-month time spreads, while in backwardation, suggests the lack of buying appetite in the prompt period.

Fuel oil cargoes scheduled to arrive in the second half of April could be delayed and traders said that the current impact of the Suez accident is not huge. The impact is also mitigated because Asian refiners are increasing their low sulfur fuel oil production because of high cracking margins.

“The blockage will push up H2 April fuel market due to the delay of cargoes,” one of the fuel oil traders said.

There might be delays in April arrivals if they decide to go around the Cape instead, another trader said.

Before the Suez Canal accident, low sulfur fuel oil from the West and being arbitraged to the East for April arrival was expected to be nearly 3 million mt, almost unchanged on the month, Platts reported earlier.

Unlike clean and crude cargo importers, who have concerns over delays, the region is well stocked with fuel oil with Singapore inventories at their highest levels in over three-and-a-half months and sufficient to meet local bunker demand.

The Singapore residual stocks in onshore terminals came in at 22.849 million barrels as of March 17, the highest since Dec. 2, 2020, latest data from Singapore Enterprise showed.

Besides, there are about 2.5-3 million mt of low sulfur fuel oil stocks in floating tankers around Singapore, up from 2 million mt as of end-February, sources said.