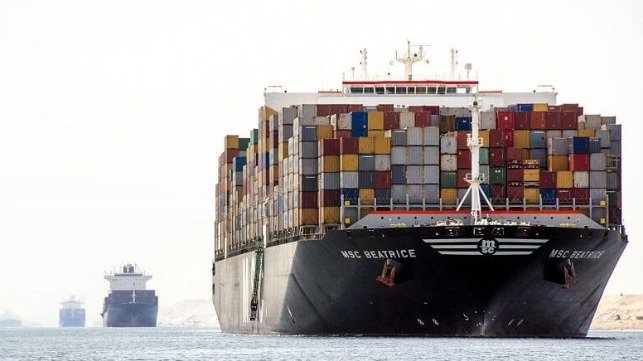 After a tumultuous year that saw the Suez Canal blocked by a large container ship and then a fight to recover fees before releasing the Ever Given, the Suez Canal Authority has now announced plans to implement a rate increase for nearly all vessels using the canal in 2022. The announcement of the increase in fees comes as the canal has been experiencing record traffic.

Rates for vessels transiting the canal will be increased by six percent beginning in February 2022. While the canal has benefitted dramatically from the increase in shipping volumes and the transit of new larger vessels, it has nonetheless also found itself facing increasing competition. During the spring blockage shipping lines elected to send some of their vessels around Africa while Russia heavily promoted the advantages of its North Sea Route. The Panama Canal has also been seeking to increase traffic offering increasing the competition with its tolls.

Admiral Osama Rabea, Chairman of the Suez Canal Authority, said in considering the rate increases they carefully followed and scrutinized all the variables related to the shipping market, global economic indicators, and global trade movement. He said that they seek to apply a balanced and flexible marketing and pricing strategy that fulfills the authority and its clients’ interests and takes into account the global economic conditions. The rate hike was balanced with International Monitory Fund and World Trade organization projections for global economic growth while allowing them to provide navigational services for transiting through the canal. He also compared their services to other competitive routes.

The Canal Authority, however, said that it would exempt both LNG carriers and cruise ships from the increase in tariffs. The canal has seen a continuous seaborne trade for LNG but it is a very competitive market. During October, 84 LNG carriers transited the canal up from 46 the prior year with an 87 percent increase in tonnage. Going forward, the Authority is modifying rates for LNG carriers from 25 percent to 15 percent starting this month.

Cruise ships, they said, had been the most affected by the COVID-19 pandemic, and the efforts are designed to support a restoration of the traffic. Similarly, the Panama Canal Authority is also considering proposals to adjust the rates for cruise ships to also support their return.

The decision to raise the tariffs came after the Suez Canal set a new record for transits during October. The number of ships was up 14 percent year-over-year with a total of 1,847 transits. Net tonnage was up more than 11 percent to 112.1 million tons contributing to a 12 percent increase in revenues to over $551.1 million.

The Suez Canal recorded its highest ever daily transits on September 29, 2021. A total of 87 vessels made the passage totaling 4.8 million net tons. During the day, a total of 49 vessels were northbound while 38 made the southbound transit.

The Authority is forecasting continued strong volumes in the coming year and says that it is prepared to manage the traffic. It is also continuing efforts to upgrade its operations and enhance the services of the canal.

Among the record traffic in October was the transit of the largest container ship, Evergreen’s Ever Act (Suez Canal Authority)