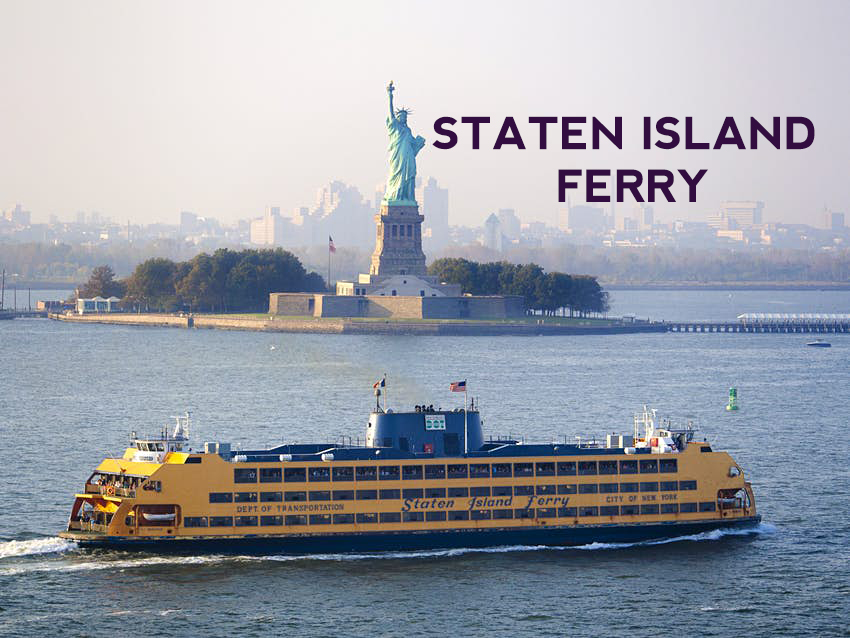 The next one on our list of top ferry rides in the world is New York’s Staten Island Ferry! Staten Islands is the southernmost borough of New York City’s 5 boroughs, in the US. Earlier, till the 18th century, the southern tip of Manhattan was the only part that was included in the City of New York, thereby leaving Staten Island with no choice of transportation. Because of this, people living on Staten Island started using periaugers, a shallow draft often without bowsprit along with oars for transport.

With the experience of sailing periaugers for a long period, a sixteen-year-old boy Cornellius Vanderbilt commenced a ferry from Staten Island to Manhattan in 1810.  During the war of 1812, when restrictions were imposed to New York harbor from elsewhere along the east coast, Vanderbilt started carrying cargo along the Hudson River. In the year 1817, the Richmond Turnpike company launched its first motorized ferry between New York and Staten Island. The journey started off with one ferry ride in the initial period of the 18th century and then developed with time.

This saw the emergence of three separate ferry companies in the mid-18th century offering services from lower Manhattan to the eastern shore of Staten Island. The Tompkins and Staples ferry New York, the New York and Staten Island Steam Ferry or “People Ferry” and the New York and Richmond Turnpike Ferry, also known as ‘Staten Island Ferry’ was the most famous ferry companies. By 1967, all other ferries in New York City had been sidelined on account of increasing competition from automobile traffic except Staten Island Ferry.  This ferry has a long history of civil war. The Union army used these ferries as they had the capacity to withstand gusty winds. To our surprise, this ferry also served as a prison. It is said that when Rikers Island faced prison overcrowding, two Staten Island ferries were transformed into prisons to hold inmates off the Bronx coast. Each vessel had the capacity of holding 162 inmates.

Later during the 9/11 terror attack, Staten Island ferry boats served New Yorkers in the relocation of thousands of people out of the danger. During this mission, the ferry boat was filled with smoke and debris leading to zero visibility where the captain faced a lot of trouble in navigating those courageous ships. Due to this event, the color of the boats changed to bright burnt orange from its original color. This attack also banned the transportation of cars by ferries for security concerns.

Today, Staten Island Ferry traverses from Manhattan’s Whitehall Terminal at the south ferry at the southernmost tip of Manhattan near the Battery following the single route. Whereas, to reach Manhattan, ferryboats depart from St. George Ferry Terminal on Richmond Terrace. The dimension of the Staten Island ferries is 310 feet long, 69 feet, and 10 inches wide with a draft of 13 feet 6inches. It has 3,335 gross tonnages with a service speed of 16 knots and 7,000 horsepower. The bright orange color ferry sailing through the natural harbor of New York has today transformed from being a transportation service to a must-visit tourist attraction.

Staten Island Ferry offers extravagant views of the Downtown Jersey City Skyline, The Lower Manhattan Skyline, and the Statue of Liberty on Liberty Island, Ellis Island, Governors Island, and the Verrazzano- Narrows Bridge. Staten Island ferry boats offer their services during the day and at night without taking a single break. It usually departs every 15-20 minutes with the intervals of half an hour during the morning from 12 am to 6 am and on weekends. According to the available data of the year 2016, Staten Island ferries are considered the busiest and bustling ferries in the United State. In the single year in 2017, it carried 23.9 million passengers.

The Staten Island’s Whitehall terminal depicts the true sense of ‘civic presence’ where you can feel as if you are part of the great city of New York. Through Staten Island, ferry one can get an entry into this terminal during all times of the day and night.  A Staten Island ferry sails the shortest distance to reach Manhattan through the St. George terminal as it’s the nearest point of Manhattan distancing approx. 5miles (8km) away. Today, the Staten Island ferry costs, no charge to its passengers, but this was not the case back in the 18th century. Back in the 18th-century fare used to be 5 cents per ride, but in the year 1997, Mayor Rudolph Giuliani eliminated the fare to standardize the metro card fares of Staten Islanders. It was mainly started to provide the transport facility to the Staten Islanders in Manhattan as Staten Islanders played a major role in getting him into the office for his first term in 1993.

Despite its glorious history, it had been the victim of so many tragedies. On October 15, 2003, the ferry carried an estimated 1,500 passengers and 15 crewmembers met with an accident which resulted in the death of ten passengers while 70 were severely injured. Although it faced tragedies, it had emerged as one of the top ferries around the world. Nonetheless, it is the most reliable, most iconic, and fast route to travel. The Staten Island ferry route is one of the busiest routes in the United States of America. With its breathtaking views, one cannot resist the urge of experiencing this short but memorable journey.