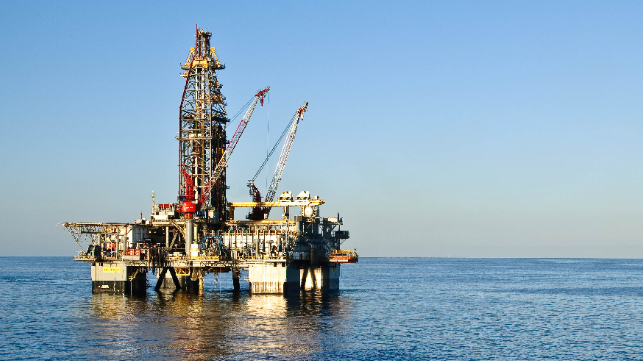 Orbital launch trajectories are heavily affected by location, and a sea-based launch site allows the operator to optimize the rocket’s payload capacity and reduce the cost for the mission.

The concept has been used successfully before. In 1999, the space company Sea Launch converted a used MODU into a launch pad for Ukrainian-built Zenit rockets. It ran a successful commercial service for communications satellite deployments until 2014 when it ceased operations due to military and political developments in Ukraine. Over the span of 15 years in business, Sea Launch put more than 30 payloads into orbit from its sea-based platform. The Chinese government still uses a similar ship-based arrangement for launching its Long March 11 rockets from the Yellow Sea.

SpaceX’s two rigs – the former Ensco 8500 and Ensco 8501 – have been renamed Deimos and Phobos, names shared by two of the moons of Mars. They are currently located at the Port of Brownsville, Texas.

According to CNBC, a SpaceX subsidiary purchased the two units from Valaris shortly before the rig operator declared bankruptcy last August.

SpaceX has not commented publicly on its plans for the two units, but last June, CEO Elon Musk confirmed in a social media post that the company “is building floating, superheavy-class spaceports for Mars, moon and hypersonic travel around Earth.” The firm’s most ambitious project – perhaps the most ambitious spaceflight project of any kind – is a reusable heavy launch rocket dubbed Starship, designed for operations up to and including manned missions to Mars. Starship’s R&D facility is located in Boca Chica Beach, Texas, just outside of Brownsville.

Plans for conversion are not yet known, but SpaceX has posted job openings for personnel for “designing and building an operational offshore rocket launch facility.” Requirements include the “ability to work on an offshore platform in Brownsville, Texas.” Budget may not be a limiting factor: Musk is the world’s wealthiest person, and SpaceX has annual revenues of $1.2 billion (and growing).

The Ensco 8500 series is a class of ultradeepwater semisubs capable of drilling in 8,500 feet of water. They are fitted with eight thrusters, 25 megawatts of generator power, two 80-ton deck cranes, a 50-ton gantry, and accommodations for 150 personnel. They were intended to be uniformly-built sisters with high parts commonality, high uptime, and low operating costs. The first unit began operations in 2009, and Ensco 8503, 8505 and 8506 are still in Valaris’ listed fleet.

When the seven 8500 series rigs were ordered in 2007-8, Ensco (now part of Valaris) paid more than $500 million for each. In a sign of the condition of today’s offshore drilling market, SpaceX acquired two of them for a total of $7 million, according to court filings.