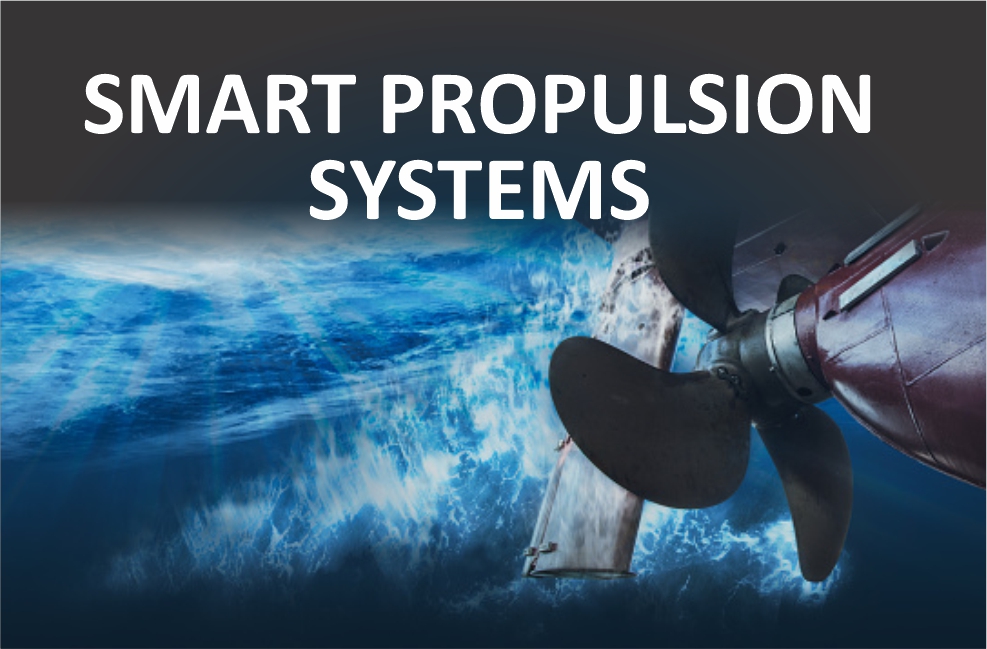 Moving on to the next topic in our list, today we are going to talk about “Smart Propulsion Systems”. Marine Propulsion is said to be a system that is used to generate motion, momentum, or thrust to the vessel. Propulsion with the help of Rudder directs a ship and helps it move across the water. The propulsion system on a vessel is a simple engine directly connected to a propeller shaft, that drives the propeller or a more complex system that contains diesel engines powering an electrical generator, supplying electrical power to an electric motor through a sophisticated control system.

Using propulsion forces ships are able to manoeuvre themselves in water. Initially, while there were a limited number of ship propulsion systems, in the present era there are different propulsion that a vessel can be fitted with.

90% of the current sea-going vessels are operating on diesel-powered propulsion. In order to reduce marine pollution, all ships must operate with a net-zero emission.

Some of the various types of system propulsion systems can be described as followed:

The most commonly used marine propulsion system which converts the mechanical energy from thermal forces is known as Diesel Propulsion. This type of propulsion system is mainly used in almost all the vessels along with small boats and recreational vessels.

Wind propulsion has emerged as an alternative method to those systems which emit CO2 gases in huge quantities in the marine atmosphere. The usage of wind propulsion is however not in extensive use in large commercial ships. It is the practice of decreasing the fuel consumption of a merchant’s vessel through the use of sails or some other wind capture device.

Naval vessels are the ones that incorporate the consumption of nuclear propulsion. Several other ships are also being planned to be constructed with this propulsion system. Nuclear thermal propulsion technology provides high thrust and twice the propellant efficiency of chemical rockets. The system works by transferring heat from the reactor to a liquid propellant. That heat converts the liquid into a gas, which expands through a nozzle to provide thrust and propel a spacecraft.

This type of propulsion is used for Naval and Non-Naval ships. It is operated by compressing air to high pressure, combusting fuel in the air stream which increases pressure and temperature, then expanding the high-pressure exhaust gases through a turbine to produce work. Some or all of the work produced by the turbine is used to power the compressor. The Gas Turbine Propulsion helps in the faster movement of the ships which is necessary in case the ship is coming under attack.

Fuel Cell Propulsion is a system that uses hydrogen as the main fuel component. The process is clean and therefore has been regarded as a very important alternative marine propulsion system. There are various types of propulsion under the fuel cell propulsion head like PEM (Photon-Exchange-Membrane) and the molten-carbonate systems.

Like petroleum-derived diesel, biodiesel is used to fuel compression-ignition (diesel) engines. Biodiesel can be blended with petroleum diesel in any percentage, including B100 (pure biodiesel) and, the most common blend, B20 (a blend containing 20% biodiesel and 80% petroleum diesel).

Solar propulsion for ships was utilized for the first time in the year 2008. Solar propulsion benefits include a high reduction in poisonous carbon dioxide emissions. It refers to the combination of solar cells and electric thrusters to propel a spacecraft through outer space. Solar propulsions are capable of generating a capacitance as high as 40 kilowatts (kW).

Steam turbine propulsion involves the usage of coal or other steam-generating fuels to propel the vessel. The steam turbine maritime propulsion system was highly utilized between the late 19th and the early 20th century.

LNG fuel is now utilized to be burnt in the Main Engine after adopting some modifications in the propulsion engine to reduce emissions from the ship. It is known as tri-fuel because it can burn gas fuel, diesel, and heavy fuel.

The various types of propulsion systems offer their own unique advantages to a vessel. Depending on the necessity and the requirement, the best type of ship propulsion system needs to be fitted. Only then the vessel will be able to offer its optimum service capacitance.