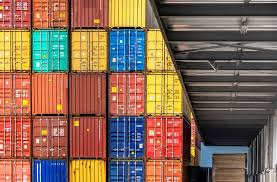 The London talks, organised by the International Maritime Organization (IMO), settled on a plan to align the industry with the Paris climate treaty.

Scientists say ships are a key source of pollution, producing a billion tonnes in CO2 emissions each year.

Shipping was left out of the original Paris negotiations in 2015.

But three years later, the IMO agreed it had to act to make the sector comply with the landmark climate deal, which aims to reduce emissions of greenhouse gases in order to limit global temperature rise.

Emissions of carbon dioxide from shipping represent about 3% of the global total.

The new rules set guidelines to make ships more efficient in how they operate and in so doing reduce their emissions, in line with Paris targets.

Tuesday’s proposals were overwhelmingly backed by the majority of the delegates to the meeting. But with little enthusiasm.

Delegate after delegate complained about the lack of ambition of the plans and that, at best, today’s outcome was “a small step”.

Britain’s representative at the talks, Katy Ware, summed up the mood of many who supported the new rules.

She said: “The UK must join others in stressing its disappointment in the lack of ambition in the draft regulations. Going forward, we call on all member states to work in unison to tackle the climate crisis.”

Only three countries rejected the new guidelines: the Marshall Islands, the Solomon Islands and Tuvalu.

The climate envoy for the Marshall Islands, Kathy Jetnil-Kijiner said: “This proposal is not faithful to the promises we made two years ago in the initial strategy. It fails to reduce emissions before 2023, it will not peak emissions as soon as possible, and it will not set ship emissions on a pathway consistent with the Paris Agreement goals. Colleagues, we must be doing more.”

Many environmental activists expressed their disappointment too. They pointed to research which shows today’s decision will not have much impact on predicted global carbon emissions.

Madeline Rose, from campaign group Pacific Environment, said: “The policy advanced today is a dereliction of duty in the face of climate emergency. As written, it would curb maybe 1% of shipping’s annual carbon emissions by 2030.

“This means that emissions from the current global fleet would still rise by an estimated 14% this decade. We remind countries today that nature does not negotiate; that climate delay is now climate denial; and that catastrophic climate change is already here.”